With ceasefire violations increasing border tension between India and Pakistan along the Line of Control in Jammu, no exchange of sweets and greetings took place between both sides on the occasion of Eid on Saturday at the international border check post at Wagah….reports Asian Lite News. 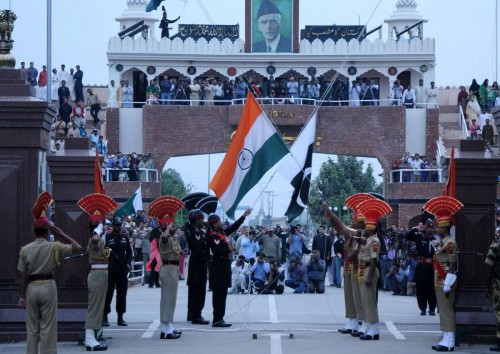 Officers of the Border Security Force (BSF) and Pakistan Rangers did not follow the tradition of the past few years to offer sweets to each other.

The tradition was broken once last October but sweets were exchanged on a couple of other occasions.

Farooqui said the exchange of sweets is decided at a meeting of officers of both border guards.

“This time, the matter was discussed but we did not get any positive response from that (Pakistan) side. We also did not pursue the matter,” he said.

However, on March 23 this year, the Pakistan side offered sweets to their Indian counterparts on the occasion of Pakistan Day.

Elsewhere in Punjab and Haryana, thousands converged at mosques to offer prayers and celebrate Eid.

In Chandigarh, hundreds of Muslims converged at the Sector 20 Jama Masjid and other mosques to mark the occasion and greet each other.

In Punjab, the Muslim population is concentrated in the Malerkotla area near Patiala, 110 km from here, and in Gurdaspur district.