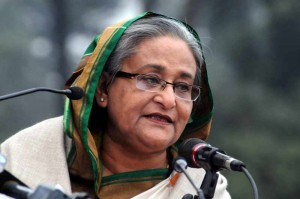 The Indian parliament passed a key constitutional amendment bill to give effect to the swapping of border land enclaves between India and Bangladesh under a 1974 agreement. Prime Minister Narendra Modi called up his Bangladeshi counterpart Sheikh Hasina to convey his greetings on the occasion.

The Constitution (One Hundred and Nineteenth Amendment) Bill, 2013, which was passed by the Lok Sabha on Thursday after being passed by the Rajya Sabha a day earlier, would help implement the historic Land Boundary Agreement with Bangladesh to settle the more than four-decade-old land boundary and exchange of enclaves issue.

“Spoke to Bangladesh PM Sheikh Hasina and conveyed my greetings to the people of Bangladesh on this landmark occasion,” Modi tweeted on the handle @narendramodi.

Modi is likely to visit Dhaka soon for a bilateral visit.

He also thanked opposition leaders, including Congress president Sonia Gandhi, and the party’s Leader of Opposition in the Lok Sabha Mallikarjun Kharge.

“I thanked these leaders for their support in the historic passage of the bill that will mark a fresh chapter in our ties with Bangladesh,” said Modi.

The prime minister said the passage of the bill was a “historic milestone” in bilateral relations.

“This would contribute to a stable and peaceful boundary, better management and coordination of the border and will lead to enhanced security as well. The amendment passed ensures a permanent settlement of land boundary with Bangladesh and resolution of long-pending boundary issues.”

He also thanked the various political parties for supporting its passage.

“My thanks to all the political parties for their cooperation, as also to the states of Assam, Meghalaya, Mizoram, Tripura and West Bengal. This reflects the collective will of the nation to build constructive relations with our neighbours.”

The bill to operationalise the agreement with Bangladesh includes exchange of territories in Assam, West Bengal, Tripura and Meghalaya, and was cleared by the union cabinet at a meeting chaired by Modi on Tuesday.

The land swap agreement envisages transfer of 111 enclaves with a total area of 17,160.63 acres to Bangladesh, while Dhaka is to transfer 51 enclaves with an area of 7,110.02 acres to India. A 6.1-km undefined border stretch will be demarcated with the bill being passed.

Meanwhile, Bangladesh’s High Commissioner Syed Muazzem Ali told reporters in New Delhi: “Today is a very historic and landmark day (for India-Bangladesh ties) as the demarcation of the land boundary between the two country has been completed after 41 years.

The high commissioner said they were also “exploring a possible visit” by Modi to Bangladesh in the first week of June.

“However, the dates are yet to be finalised,” Ali added.