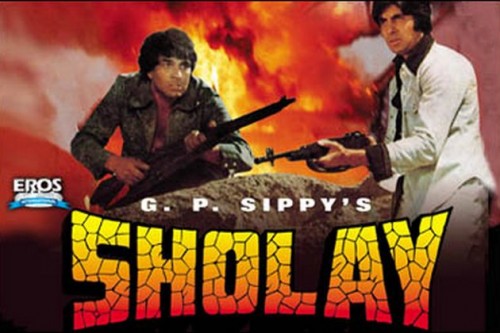 The cult classic “Sholay”, an action adventure Bollywood movie circling around two petty thieves hired by a police officer to exact revenge on a ruthless bandit, is set to release in Pakistan, 40 years after hitting Indian theatres.

The release of the Amitabh Bachchan and Dharmendra-starrer, directed by Ramesh Sippy, in 1975 proved to be a watershed event in the industry. The movie screened for five years at a landmark Mumbai theatre, the longest ever run in India at the time.

It’s no wonder that owner and managing director of Mandviwalla Entertainment, Nadeem Mandviwalla is now bringing the iconic classic to Pakistani cinema screens, over 40 years after its release.

“‘Sholay’ is undoubtedly one of the most unique films of all time; it’s a classic that has never been released in the country.

“Many people have been deprived of the experience of watching it in a cinema so we feel the audience will want to come watch it, given the opportunity,” Dawn quoted Mandviwalla as saying.

The movie was remastered last year in 2014 and released in 3D for the new generation of moviebuffs. It will be releasing in 2D and 3D in Pakistan.

“The movie will not have a wide release. It will be shown at more cinemas but (with) less shows. It’s tentatively releasing March 20, as March 23 will be a public holiday (on account of Pakistan Day), so people will have a wide array of movies to watch such as ‘Jalaibee’ and ‘Insurgent’, which are also releasing around the same time,” said Mandviwalla.

Other movies that have been reworked and released in 3D in Pakistani cinemas were “The Lion King” and “Titanic”, which didn’t garner much attention. It will be interesting to see if “Sholay” will meet the same fate. For what it’s worth, it seems highly unlikely.