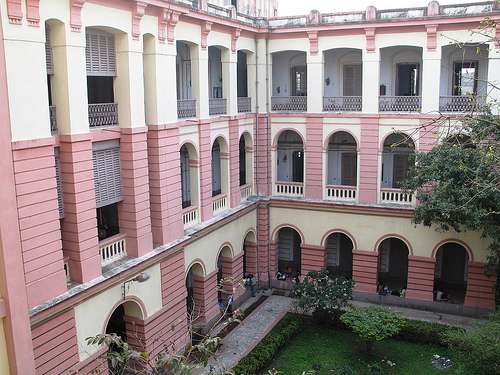 In its 198-year-old history, Presidency University (formerly Presidency College) has seen it all – from being a prominent hub of India’s nationalist movement, to emerging as hotbed of West Bengal’s Maoist agitation. it has churned out elites and Nobel laureate – and of late, witnessed a spate of ignominious anti-establishment students’ protests.

Barely a year after Jadavpur University’s popular ‘Hok Kolorob’ (Let there be shouts)student agitation subsided, the Presidency campus, where the likes of Chittaranjan Das, Subash Chandra Bose, Rabindranath Tagore and Swami Vivekananda studied, simmered with what most have have termed an “indecent” agitation.

A section of students confined Vice Chancellor Anuradha Lohia in her office for over 30 hours, defaced walls, stood on her table, vandalised her nameplate and demonstrated with posters and slogans both inside and outside her office, demanding her resignation.

The trigger: An official visit of West Bengal Chief Minister Mamata Banerjee to the varsity campus to announce a slew of funding initiatives and ventures.

They greeted her with black flags and shouted slogans demanding action against those – purportedly activists of ruling Trinamool Congress’ students’ wing – who were behind the vandalising of the university’s heritage Baker Laboratory in 2013.

Lohia has ruled out any resignation saying she was an apolitical person and the college was dependent on the state government for funds.

The methods used by the students to make their point have been roundly criticised by a wide section of the people.

The students claimed to have been roughed up by police during the visit, and alleged the vice chancellor failed to protect them.

However, the real message, said Trisha Chanda, the students union general secretary, that the students (including a male protestor dressed in black boxers and bra) failed to convey through the movement was the “autocratic” reign of the vice chancellor.

“In the last one-and-a-half year, there have been transfers, renowned academicians have quit as faculty and she refused to listen to our pleas when a stringent attendance system was imposed and several students were barred from exams.

“This has not happened during the previous vice chancellor’s timea so why now? We want academic excellence and that is why we are raising our voices,” Chanda told IANS.

But she did concede their mode of protest was not right for an institution as prestigious as the Presidency University, and that is why they later apologised. But the call for Lohia’s resignation stays loud and clear.

Lohia has stood resolute on her stance that “resignation is not happening under any situation”. She has even defended the perceived “closeness” to the chief minister, including her accompanying Banerjee during her London visit in July.

“I am not close to anyone. Yes I went with the chief minister to London. I went when she asked me to go for an administrative meeting. I was not the only VC there. There were four others. How come no one else was targeted? Maybe they think I am close to her but as far as I know, I am not close to anyone,” Lohia has said.

A Presidencian herself, Deboshruti Roychowdhury, the former dean of students at the varsity, who has “wholeheartedly” supported the agitation, doesn’t approve of the tenor of the movement.

“I did scold them. But the reason they are fighting for is completely justified. Academic excellence has gone down the drain over the last one-and-a-half years.

The protests reached a climax on the day of the varsity’s third convocation on August 23, with the agitating students calling for a boycott though the event went off peacefully.

Eminent scientist Bikash Sinha, a Presidency alumnus, lambasted the “sorry state of affair” in Bengal and reiterated his concern about the state being a failure.

Former director of the Indian Institute of Science (IISc) Padmanabhan Balaram, who was the chief guest at the convocation, criticised the country’s sole preoccupation with politics and its fading culture of learning and scholarship.

However, Chanda and her fellow agitators have denied any political motivation in the movement.

With the students now softening their stance, comparisons have started cropping up between the hugely successful ‘Hok Koloroba’ movement and the Presidency damp squib.

In September, 2014, police had resorted to a midnight baton charge after being called in by then Jadavpur University vice chancellor Abhijit Chakrabarti to clear out students laying siege to his office over their demand for an independent probe into a molestation.

The police action only intensified the protests with the movement, finding support from various educational institutes across India as also from alumni across the globe.

The Presidency fracas too garnered support. Student unions at the University of Hyderabad and New Delhi’s Jawaharlal Nehru University have stood by the agitators.

Stark contrasts exist, though, in the two cases.

While Governor K.N. Tripathi and Higher Education Minister Partha Chatterjee have extended support to Lohia, a year ago Chakrabarti’s removal was announced on a megaphone by Banerjee amidst a large gathering of student protestors.

Presidency University has its roots in the Hindu College, established in 1817 that cradled the 19th century Bengal renaissance. It was christened Presidency College in 1855.

The previous Left Front government in the state upgraded it to a university in 2010.