Foreigners who are not familiar with the ways of Western toilet etiquette, the Swiss are here to help them. A series of signs – apparently aimed at visitors from Southeast Asia and the Middle East – explain how one should sit on a loo seat, rather than squat; and throw toilet paper into the lavatory, rather than into the bin.

One of the places the pictograms are on display is Mount Rigi railway, at Lake Lucerne. Surrounded by the Alps, the site is popular with Asian tourists.

‘It happens that guests mount on the toilet seats to do their business – and sometimes they don’t know where to put the [toilet] paper,’ Roger Joss, director of marketing for the railway told 20 Minuten newspaper.

However, visitors from Korea and China interviewed by the paper said the campaign was unnecessary as they already knew how to use the facilities correctly.

They may well ‘pooh pooh’ the strategy – but Marcel Furer, head of the regional tourist office, told 20 Minuten: ‘Tourists from the Gulf region or Asian countries are not very aware of our way of living.

‘It’s happened that people relieve themselves in the shower rather than in the toilet.’ 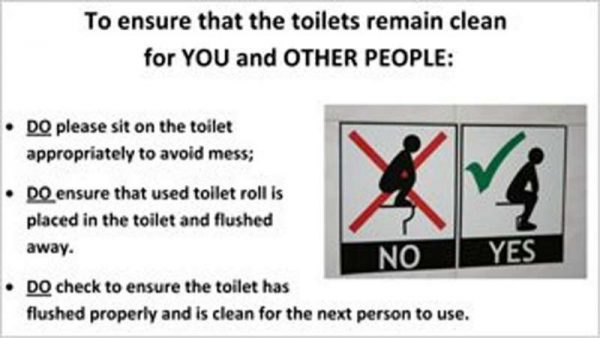 And Switzerland isn’t the only country cracking down on the issue reports Daily Mail.

In March last year, Lloyds Bank put up instructions telling foreign staff how to use the loo, with details such as ‘sit on the toilet – do not stand on it’, and ‘please flush it with your hand and not your foot’.

With the help of diagrams, workers were shown how to open the door using their hand, and were requested not to leave toilet roll on the door handle.

The instructions, put up in Lloyds Bank’s Old Broad Street office in central London, gave full instructions of British etiquette in the lavatory, including ‘The sinks are for washing your hands only – no using hand towels or toilet paper as a plug’.