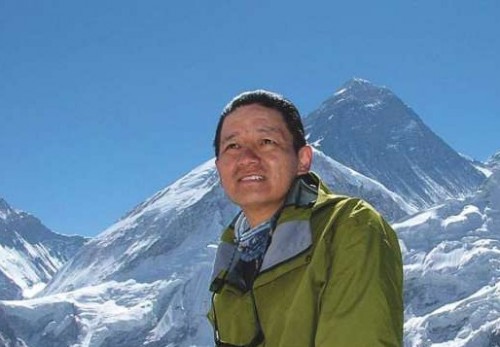 A team, including 10 Indian women, led by late Nepalese mountaineer Tenzing Norgay’s son Jamling, halted their trek towards the Mount Everest Base Camp after the earthquake jolted Nepal.

According to information reaching here, the group has cut short its 17-day trek and is now waiting to be evacuated by helicopter from Tengboche village in Khumbu region of northeastern Nepal where they were led by Jamling.

Jamling and the team were headed to the Base Camp of the world’s highest peak as part of a ‘Fulfill Your Everest’ initiative, launched by Star Plus channel and Fair and Lovely (FAL) Foundation. This was being done as an extension of the channel’s show “Everest”, produced by filmmaker Ashutosh Gowariker.

“They stayed over at Tengboche for the last two nights,” a source who had been in touch with the trekkers, said.

A top official of Mercury Himalayan Explorations (MHE), an organisation which helped finalise the 10 women participants for the trek, said the team was safe and it had access to food and shelter.

Akshay Kumar, CEO of MHE, said: “We are in touch with them. They are completely fine. We don’t want them to head to Kathmandu, where the situation is quite chaotic.”

He said his office was in touch with the Nepal embassy, insurance officials as well as the Indian Air Force to get the team airlifted out. “We are hoping to help bring them back soon,” he said.

Jamling, 49, who summited Everest in 1996 and is the son of Tenzing who conquered Everest with Edmund Hillary in 1953, is communicating about the team’s status through a satellite phone.

The team had taken off on a flight to Kathmandu from Delhi on April 20 and upon reaching there they took off to Lukla, starting the long trek. They were five days into the trek when disaster struck.

Reports reaching Kathmandu said that more than 150 mountaineers are still stranded in two camps sites of Mount Everest, where avalanches triggered by the 7.9 magnitude earthquake on Saturday and a 6.7 aftershock on Sunday worsened the situation.