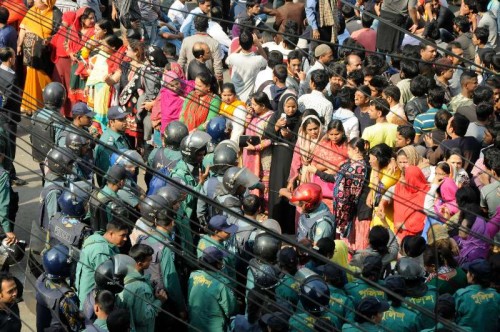 The victims were shot dead in a clash between AL activists and those of former prime minister Khaleda Zia’s Bangladesh Nationalist Party (BNP) in Natore district.

“Two people have died from injuries suffered in clashes. We’ve come to know that they are involved in BNP politics,” a district official told Xinhua.

A political standoff over the opposition alliance’s demand for a fresh polls under a non-party caretaker government system culminated with both the ruling and opposition parties calling rallies Jan 5 in Dhaka.

Paramilitary Border Guard Bangladesh (BGB) personnel were deployed in Dhaka and other parts of the country to thwart any untoward incident over the opposition’s plans to hold rallies defying police bans.

Police have imposed an indefinite ban on meetings, processions and rallies in Dhaka since Sunday evening, a step the opposition described as an attempt to mute dissenting voices.

The communication through major road and waterways, connecting the capital have also been suspended.

BNP, which has no representation in the current parliament as it boycotted the Jan 5 parliament election in 2014, reiterated its commitment to unseat the government.

Khaleda’s opposition alliance now wants to observe Jan 5 as “Democracy Killing Day” and hold a grand rally Dhaka, while Prime Minister Sheikh Hasina’s ruling AL is all set to celebrate it as “Victory Day for Democracy”.