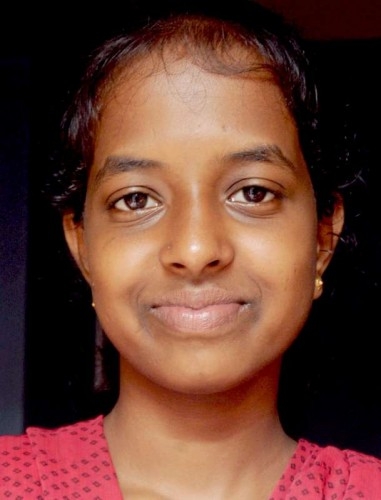 Seventeen-year-old Shalini, who doubles up as a housemaid to support her family, has found a solid reason to dream big. She appeared in the two-year pre-university course (PUC) board exam and scored an impressive 85 percent recently.

“My hard work has paid off. I used to study for final exams whenever I was free from work as maid in five-six homes around the neighbourhood and household chores,” a gritty Shalini said at her small rented home in the city’s western suburb.

The Karnataka Examination Authority declared the PUC results on May 18 for the exams held in March across the state.

Though distinction was not new to this only daughter of a poor family, as she scored 86 percent in 10th class board exam two years ago, it is her ability to repeat the feat despite adversity that inspires.

While preparing for her exams, she also looked after an ailing father Armugam, bed-ridden since falling from a building over a decade ago, and younger brother Surya, who is undergoing treatment at a state-run hospital for blood cancer.

“As my mother (Vijay) is the only earning member and works as a domestic help in dozen homes, I used assist her and learn washing utensils and clothes, sweeping and mopping floors and sprinkle water in front of houses to draw rangoli (colours).

Later, she also took up the same work at some houses to add to the family’s income.

Having studied in Tamil medium up to seventh class, eighth and ninth class in Kannada medium, Shalini switched over to English medium in 10th class. She wrote the exams in English with ease from Vivekvardhani School.

“Tamil is my mother tongue and Kannada is the local language. I opted for English in 10th class to do PUC and degree in the same language,” Shalini shared in flawless English.

A shy and reserved ward, Shalini surprised even those for whom she worked as a domestic help.

“They (owners) were delighted to see me talking about my performance in PUC on news channels and read about me in some newspapers with my phone. They wondered how I managed to study so well while doing maid work in their homes,” Shalini said.

Unfazed by social and economic hardships, Shalini now wants to graduate in electronics and communications and become a software engineer in an Indian IT bellwether or a multi-national in this tech hub.

“I am waiting for CET (common entrance test) results so that I can join a reputed engineering college like BMS, BNM or VIET in the city with support from trusts, scholarships and donation from charitable institutions,” Shalini said.

Recognising Shalini’s talent and hard work, the Mysore-based Swami Vivekananda Youth Movement paid her admission and tuition fee in the Sri Gururaj Parents and Teachers Association Pre-University College in the city’s southern suburb. It was a reward for passing the SSLC board exam with distinction.

“The trust also paid for my annual bus pass and books. I hope to get similar financial assistance from others to study engineering if I don’t get scholarship, as my family cannot afford to pay the exorbitant fee in a degree college,” Shalini said.

Admitting that it would be a tough call to juggle studies and work as a domestic help at the degree level, Shalini said she has no choice but to keep sharing her mother’s burden.

She knows her family has no health insurance or any other source of income to pay for father’s and brother’s treatment and meet house expenses.

“Living in a costly city like Bengaluru has been a struggle, as we don’t have property or assets,” said Shalini, adding: “But I have learnt to face troubles and cope with pressures to excel,” Shalini added.