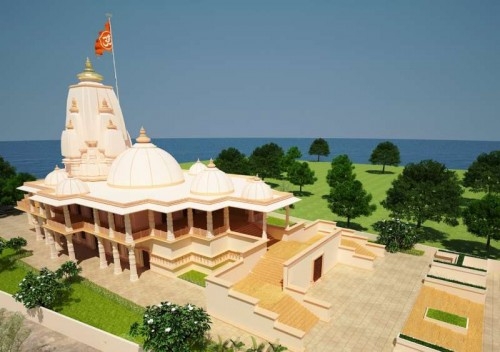 The world’s biggest Hindu temple coming up in Bihar, for which Muslims have also donated land, could inspire the building of the Ram Temple in Ayodhya, Union Minister of State for AYUSH Shripad Naik said.

Naik however, admitted that building the temple would take time because it is a “complicated issue”.

The North Goa MP, who was addressing a press conference at the party’s state headquarters in Panaji, also called the construction of the Ram temple a “national task” and said that the National Democratic Alliance (NDA) government would continue to help organisations pursuing its construction.

“You must have heard the news about one community donating land on their own volition for building a temple. The government’s efforts will be to solve the problem mutually… The government will work in this direction,” Naik said.

Naik was referring to news stories published in the national media last week about the proposed construction of the world’s largest Hindu temple by the Mahavir Mandir Trust in Bihar, for which some Muslims had donated land, while several others from the minority community had offered land at nominal prices.

Naik also said that the Ram temple construction, a pet issue of the BJP in the 1990s, “is a complicated issue, therefore it will take time”, but also added that while his government backed the construction, it was not the government’s job to actually build a temple.

“Building a Ram mandir is not the government’s job, but we will offer whatever help we can, keeping the emotions of our countrymen in mind… There are other organisations which are pursuing the actual construction work, we (government) will help as it is a national task,” Naik said.

Naik also said that 60 per cent of the problem related to the construction of the Ram temple had been solved and no new law was needed to push the project through.