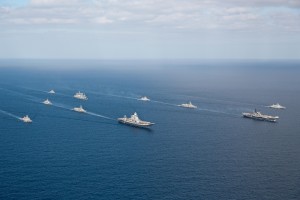 The Indian Navy  admitted to “accidentally” shooting a fisherman in a boat in the Arabian Sea, around 80 km off Mumbai, adding that an inquiry was ordered into the incident.

An Indian Navy officer said the fisherman had strayed close to an offshore oil rig, a high-security zone.

The incident occurred late Sunday evening when an Immediate Support Vessel was on a coastal security patrol in the high-security and prohibited Offshore Development Area (ODA) of Bombay High, around 80 km off Mumbai.

The vessel observed a fishing boat was anchored close to an oil platform and it was warned to move out from trespassing into the restricted area.

“Despite repeated warnings, the boat refused to move out of the prohibited area, that is when the warning shots were fired into the water… One round deflected on hitting the water and accidentally hit a fisherman in the boat,” the Indian Navy said.

He was immediately evacuated by a helicopter and rushed to an onshore hospital for treatment. His condition is reported stable.

The victim’s family was informed and the incident has been reported to the Joint Operations Centre which has now ordered an inquiry into the matter.

“The incident was immediately reported to the Joint Operations Centre which is manned round the clock and where all authorities concerned with coastal security are present,” the Indian Navy officer said.

“ODA is a very high security zone and is a no go area for normal shipping/ fishing traffic. The area is kept under vigil 24×7 by Indian Navy, Indian Coast Guard and other relevant agencies,” he added.

“It has oil rigs which are involved in drilling and extraction of crude oil which is then conveyed ashore by a maze of underground pipelines…. The mariners are always advised to remain clear of these areas as a general practice,” the officer said.