A UN report says that Indians in its peacekeeping operations were involved three substantiated cases of sexual exploitation or abuse between 2010 and 2013…..reports Asian Lite News. 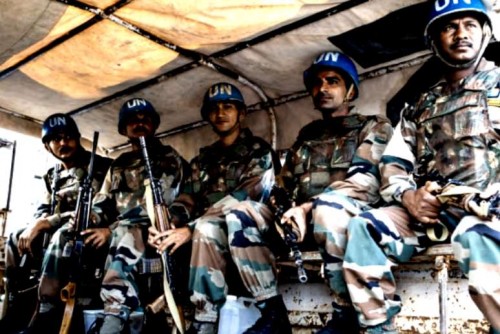 During those four years, there was a total of 64 substantiated cases of sexual abuse by UN peacekeepers, according to the report released Friday. More than 100,000 uniformed personnel serve in UN peacekeeping operations.

For context, the UN Office of Internal Oversight Services (OIOS), which looked into allegations of sexual exploitation and abuse in peacekeeping operations, however, noted in its report that largest contributors of troops to the UN like India had lower incidence of cases of abuse.

India, which currently has over 8,000 personnel in the peacekeeping operations, is one of the largest contributors to the UN.

The other largest contributors of uniformed personnel to the UN are Pakistan, which has more than 8,750 in UN operations and had four substantiated cases, and Bangladesh with over 9,000 personnel and two such cases.

Britain, which has fewer than 300 personnel serving in UN operations, had one substantiated case. South Africa with 2,160 had the highest number of cases, nine. Uruguay with under 1,500 personnel had eight cases.

The UN Department of Field Services, which deals with the deployment of personnel in peacekeeping operations, said in response to the report, that given the huge number of troops deployed “it can easily be argued that such data would more appropriately point to individual failings than to the overall attitude of a member state’s military forces towards SEA (sexual exploitation and abuse).”

The report lacked specific information about the incidents, except for one case against Pakistani police personnel in Haiti involving the abduction and rape of a 13-year-old boy.

According to the report, besides outright violence and rape, many cases involved troops providing gifts to women and girls, exploiting their poverty. In some of the instances, the women were given food and supplies for babies and in others, gifts like jewelry, clothing and electronics.

One of the areas of concern in the report was the lack of action by many countries sending personnel to the UN operations when complaints of sexual abuse were made. It would appear that India has been cooperating with the UN when complaints arise and taking action as it was not listed among the nations that had not complied with its requests for reports on follow-up actions.

In an earlier case involving Indian peacekeepers in Democratic Republic of Congo in 2008, India ordered 12 officers and 39 soldiers to undergo DNA tests to see if they had fathered children with local women.