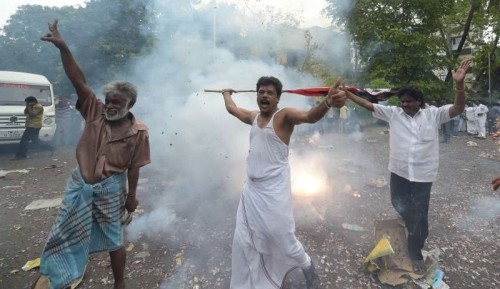 With former Tamil Nadu chief minister J. Jayalalithaa being acquitted in a disproportionate assets case , the AIADMK juggernaut is all set to roll in the 2016 assembly elections, said a political analyst.

“With the court acquitting Jayalalithaa of all charges, there is nothing to stop the AIADMK juggernaut to roll down the opposition in the ensuing assembly elections,” Gnani Sankaran, political analyst,said.

The AIADMK may go for snap elections before the end of this year to ride on the sympathy wave that has swelled in favour of Jayalalithaa, he said.

A similar view was shared by a senior leader of a national party who did not want to be quoted.

According to political observers, the AIADMK may go it alone in the assembly elections as it did in the Lok Sabha elections.

The DMK may try to forge an alliance with parties other than the Congress and the BJP. But with its leaders – A. Raja, Kanimozhi, Dayanidhi Maran – being tried for the 2G scam, it will be difficult for the party to pose a serious challenge to the ruling party, the politician said.

On the other hand, the DMDK may try to continue with the BJP-led National Democratic Alliance (NDA), though the DMK may try to woo it.

“There are also possibilities of BJP tying up with AIADMK,” Sankaran said.