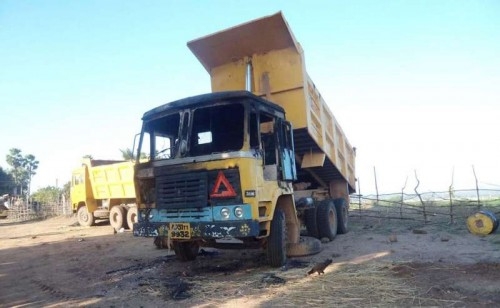 Maoists burnt 32 vehicles in Bihar’s Gaya district to enforce a two-day shutdown  to protest the killing of a woman leader of the rebel group, police said.

They also blew up a mobile phone tower in Panapur area in Saran district, about 100 km from here.

Around two dozen trucks were among the vehicles set on fire. The Maoists are also protesting security forces operation against them, police said.

The drivers of the burnt vehicles told police officials that Maoist guerrillas asked them to get away from the vehicles before setting them afire.

Taking serious note of the attack, police headquarters in Patna directed the district police to intensify combing operations against Maoists.

Additional security forces have rushed to Gaya, a Maoist-affected area as it shares border with neighbouring Jharkhand, a police official said.

Maoists have given a strike call to protest the killing of a woman Maoist commander in a gun battle with security forces last week.

Bihar Police chief P.K. Thakur told the media that situation was under control and normal in Gaya and other places despite incidents of violence by the Maoists.

Chief Minister Nitish Kumar has called a meeting of top officials here to take stock of the situation, an official said.