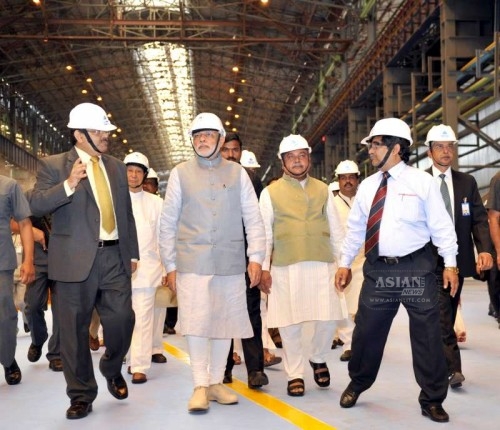 The central government has committed to spend about Rs.400,000 crore on these missions over the next six years.

The prime minister will also launch operational guidelines for these missions.

An official release here said the focus will be on providing basic infrastructure like tap water and sewer connections to every urban household and solid waste management under AMRUT. The mission will also entail provision of roads and public transport, support to reforms for urban governance and enabling urban local bodies to meet service-level benchmarks in respect of various services.

AMRUT will cover 500 cities with a population of above one lakh each.

The release said two crore houses are proposed to be built by 2022 under PMAY for the urban poor, including economically weaker sections and low income groups.

The central assistance under these components will be in the range of Rs.1 lakh to Rs.2.3 lakh, the release said.

“The objective is to enable better living and boosting economic growth for the benefit of all sections. This will be implemented through retrofitting (enhancing infrastructure in already built-up areas and adopting smart solutions), and redevelopment by demolishing already built up areas with fresh layouts for intensive land use and smart solutions,” the release said.

It said greenfield projects can be taken up for accommodating people outside the existing cities.

Urban Development Minister M. Venkaiah Naidu said the prime minister “will be heralding a new urban era in the country” with the launch of the missions.

“Effective implementation of identified reforms is the key to the success of new missions. Urban governance needs to be improved substantially to ensure citizen participation, transparency and accountability and efficient service delivery to citizens,” the minister said.

He said simultaneous launch of three urban missions reflects the integrated approach of the government to urban development.

“The central government has committed itself to spending about Rs.four lakh crore on these three missions over the next five to six years, which is unprecedented,” Naidu said.

He said the new missions have been formulated after about an year-long extensive consultations with the states, union territories and urban local bodies “to involve them at every stage of formulation so as to avoid the pitfalls” in implementation of Jawaharlal Nehru National Urban Renewable Mission (JNNURM).

The launch of the three new urban missions will be followed by a two-day consultation with states and elected and administrative heads of municipal bodies.