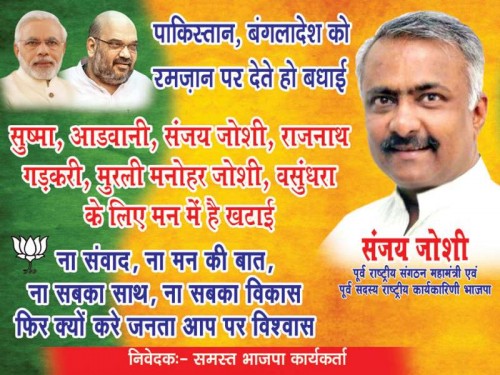 These posters were put up at different places in central Delhi despite Joshi’s last month appeal to his supporters not to put up posters or malign the party.

The posters carried photographs of Modi and BJP chief Amit Shah, but it did not name them.

The posters were spotted outside the residences of party president Amit Shah, senior leaders L.K. Advani and Murli Manohar Joshi, union Minister Nitin Gadkari, and the headquarters of the Bharatiya Janata Party (BJP) and the Congress.

It also said that “Na samvaad, na mann ki baat, na sabka haath, na sabka vikas, phir kyun kare janta aap par vishwas”. (When there is no conversation, and no development of all, then why should the people repose faith in you).

On May 21, Joshi had written a letter to his supporters not to put up posters or malign the party, saying he was an active BJP worker and that “Narendra Modi is my leader”. He wrote the letter after posters in his support had surfaced in Delhi and Uttar Pradesh.

Joshi was sacked from the BJP in 2005 after a sex scandal surfaced at the party’s national executive meet in Mumbai. Later, a Madhya Pradesh Police probe cleared him.