Despite having stiff global competition, Indian spices maintained their robust demand in the international market with exports touching a whopping Rs.14,899 crore in 2014-15 as compared to Rs.13,735 crore a year ago…. reports Asian Lite News. 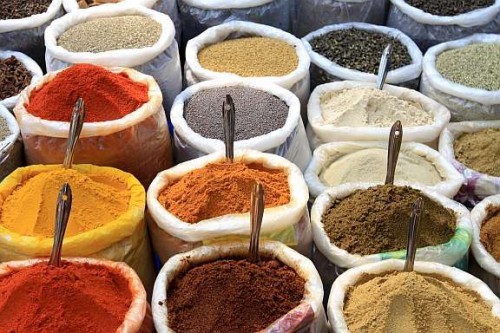 Chilli, mint and mint products, cumin, spice oils and oleoresins, pepper, turmeric, coriander, small cardamom, curry powder/paste and fenugreek contributed substantially to the spice export basket as the demand for the Indian spices scaled up phenomenally at the global level.

Spices Board, the flagship organisation under the union Commerce and Industry Ministry, has been able to meet the export target by devising multifaceted activities for promotion of Indian spices and sustaining their demand in the global market.

“The achievement is substantial and it was achieved in the face of tough competition. Increased demand for Indian spices in the international market is a testimony to their unmatched quality and escalating faith in their sustainability,” Spices Board chairman A. Jayathilak said.

“Indian spices are not only lucrative products for the national exchequer but have also become a trusted global brand,” Jayathilak added.