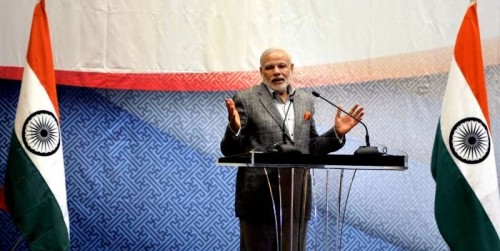 Recent reviews of global institutions and the prevailing investor confidence suggest a striking change in the perception about the Indian economy cover the past year. Yet, some crucial agenda remains for Prime Minister Narendra Modi’s government as it enters its second year on Tuesday.

IANS spoke to a host of stakeholders and analysts over the past week and this is report card on the overall performance of the government since it was inaugurated on May 26 last year under Modi after a dramatic win for his Bharatiya Janata Party (BJP) in the national elections. It gave India a single-party majority after some 30 years.

Since May 16 last year, when the elections results were declared and it became evident that the next government will be under Modi — who has been pro-business and an investors favourite — the stock markets have soared, with a key index now up some 17 percent, after touching an all-time high in March.

There were improvements in other parameters of the economy as well, notably on inflation that is now at historically-low levels, even as the rupee did not fall as much as other currencies against the dollar. Albeit in spurts, there emerged some green shoots, even as reform-oriented decisions came in regular doses. (See Accompanying Box on 25 Achievements, 25 Challenges).

All this led to many global institutions like the World Bank, International Monetary Fund, Asian Development Bank and some UN institutions to upgrade India’s growth forecast to some 7.5-8 percent, calling it the fastest expanding globally, surpassing China.

Even some global ratings agencies like Moody’s that had not-too-long-ago warned India of a downgrade, if its policy-makers did not pursue a course correction, changed their outlook for the country to positive from stable. Fitch also also reaffirmed its stable outlook.

In this regard, the most crucial contribution of the government has been the corruption-free administration as pointed out by Finance Minister Arun Jaitley.

As the Modi government goes about changing global perceptions, its actions are guided by the belief of the need to change the mental outlook of the country. In fact, integral to rising aspirations and ease of doing business are the campaigns for sanitation and clean governance, said the analysts.

There is a new code of civic behaviour being created through cleansing campaigns like Clean India, or Swachch Bharat, and the Clean Ganga project. The first year has been a cleansing exercise, as some analysts point out.

“An economy of two trillion dollars, well integrated with the world, cannot be catapulted into high growth merely with change in the government. However much the government is sincere, the policy tweaking, legislative changes and revival of investment appetite to be followed by increase in consumer demand would take about two, two and a half years. A lot would also depend on the global markets which are subdued but all the same the government has made a good beginning,” he said.

“The prime minister’s foreign visits have brought in a qualitative change in the way our economic diplomacy is being pursued. Our missions abroad are much more aligned with the economic priorities while our efforts in Yemen crisis and Nepal earthquakes have come for great appreciation,” Rawat added.

Another industry captain, A. Didar Singh, secretary general of the Federation of Indian Chambers of Commerce and Industry (FICCI), told IANS that the business confidence continued to be high and the investor community had begun gearing up to tap the huge potential of the economy.

“India today is in a far better situation than it was a year ago,” Singh said.

“The GDP growth has improved, advance estimates for the current fiscal are higher at 7.4 percent as against 6.9 percent for fiscal 2014. Industrial growth is slowly picking up. Major improvement has taken place with respect to inflation. Foreign direct investment inflows have seen 44 percent surge during May 2014 to February 2015,” he said.

“The policy direction set by the Modi government has definitely improved business sentiments. The government has given a huge impetus to infrastructure activities and taken several steps to revive the growth of the economy,” he added.

As pointed out by Atsi Sheth, senior vice-president of ratings Agency Moody’s, which had warned India of a downgrade some 18 months ago — a move that would have been a major blow to India and would have rendered junk status to the country’s bonds — there has been much push on the policy initiatives, which is positive for growth, even though the pace has slow and uneven.

“But this pace is in line with what we at Moody’s anticipated, given the diverse interests within India’s polity and economy,” Sheth said.

“The establishment of an inflation targeting framework, the efforts to address banking sector weaknesses, the passage of various bills and a realistic budget are all positive for the sovereign credit profile. But ultimately it is implementation of infrastructure, regulatory and governance improvements that will determine whether reform is successful or not,” Sheth added.

At the same time there were some major irritants as well like the issue of retrospective taxation which dampened India’s image overseas – so much so that this was a point that was virtually raised at every forum forum by existing and potential foreign investors with Finance Minister Jaitley.

“Taxation related uncertainty does dampen investor sentiment, even if clarifications are later offered. While the issue may not have overshadowed reforms, it detracted from efforts to increase the ease of doing business, which was the centerpiece of the reform agenda,” Sheth said.

The stakeholders were also happy with three other programmes, initiated by Prime Minister Modi during the year — “Make in India”, “Digital India” and “Skill India”.

He felt some announcements, like the 3,300 km West-East Road Corridor project, will kick-start the cement, steel infrastructure and other industries.

“In the coming days, I am seeing ‘achche din’ (the ‘good’ days promised by Modi in his election campaign). The government has delivered wonderfully in the spectrum auctions and the coal auctions while ensuring economic stability,” he said.

“The re-rating of India and it’s credit from international agencies has boosted the sentiment. I see growing confidence in the banking sector too. The feel in business sentiments on account of the government’s initiative under Modi is very positive.”