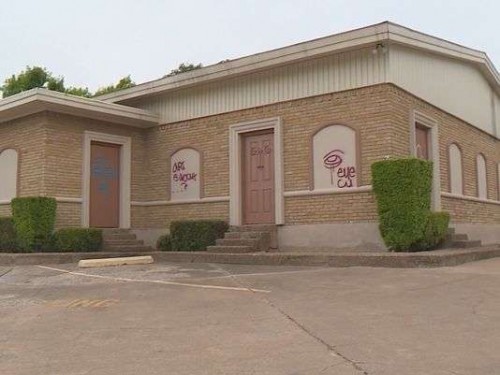 In the latest attack on Hindu houses of worship in the US, a temple has been vandalised in Texas “horrifying” both Hindus and non-Hindus, who have offered to help the temple clean the damage, media reported.

In the attack at the North Texas Hindu Mandir in Lake Highlands suburb of Dallas, vandals painted symbols of devil worship on the temple’s door, media reports said .

The attackers left behind on a shed at the temple the mark of Mara Salvatrucha, an international gang originating among immigrants from the predominantly Catholic nation of El Salvador and active in the US.

The 11CBS network in Dallas-Fort Worth area reported that a temple board member, Krishna Singh, said mandir members discovered the graffiti last Monday. “That was a big shock, really,” the network quoted her as saying.

“It makes me sad inside,” a nine-year-old child, Gracie Reed, told 11CBS. “To me, it’s really horrifying because I don’t know who would do this to a church,” the child said referring to the house of worship.

Dallas police have sent detectives from their gang unit to investigate the incident, according to WFAA, an ABC network affiliated local station.

While the administration of President Barack Obama, who has criticised India over religious tolerance, and Christian leaders have not reacted as of Sunday to the Texas vandalism, non-Hindu neighbours have offered to help the temple. WFAA reported that a clean-up effort was scheduled for Sunday.

Ted Hoffman, who lives across from the temple, told 11CBS, “We all find it appalling” and the neighbours have offered to help paint over the symbols.

The gesture of help from neighbours was welcomed by Hindus. WFAA quoted the temple treasurers Karen Snorton as saying she found the offer reassuring. “They’ve been here so that’s a positive thing that’s come out of all of this.”

In a statement, Universal Society of Hinduism president Rajan Zed thanked the neighbours for offering the temple help.

To counter such attacks, Zed urged fellow Hindus to educate Americans about Hinduism. “Basics of major world religions should be taught in high schools of the country and first responders should be imparted cultural competency training,” he added.

The temple supports community charities like food banks for the poor and an organisation that helps victims of child abuse.

Snorton told WFAA that MS-13 was spray-painted on one of the sheds. MS-13 is the abbreviated name and tag or signature of Mara Salvatrucha.

According to 11CBS, “666” and an upside cross were painted on the temple door. They symbolise devil worship.

Some Christian leaders, including a former candidate for the Republican Party’s presidential nomination, Pat Robertson, have called Hinduism “demonic”.

Robertson is a pastor who has a following of millions in the US and abroad and his TV show, Club 700, is carried on Christian Broadcasting Network, which says on its website that it operates in India.

The attack is the latest in a series attacks on Hindu places of worship. Two temples were vandalised in Washington State in north-west US in February.

In August, a statue of Shiva at the Vishwa Bhavan Hindu Mandir in Monroe in the state of Georgia was desecrated with black paint. The local sheriff’s office arrested two people in connection with the attack.

Between July and October in Loudon County in Virginia, police have documented 17 separate incidents of anti-Hindu vandalism, the Hindu American Foundation said.

The attacks come amid anti-Hindu propaganda by Christian fundamentalist leaders.

Besides Robertson, Christian pastor Franklin Graham, has denounced Hindus as followers of a “false religion” and said that “none of their 9,000 gods is going to lead me to salvation. We are fooling ourselves”.

When Zed was invited to say the opening invocation at start of an Idaho state Senate session last month, some legislators protested.

Senator Sheryl Nuxoll said she boycotted the invocation because she said she believed the US is a Christian nation and “Hindu is a false faith with false gods”.

However, Catholic Church’s leadership in Idaho state criticised her and declared her denunciation of Hinduism “do not represent the opinions or teachings of the Roman Catholic Church, (Boise) Bishop Peter Christensen or even our Holy Father, Pope Francis, who has been an outspoken supporter of ecumenical and inter-religious dialogue.”