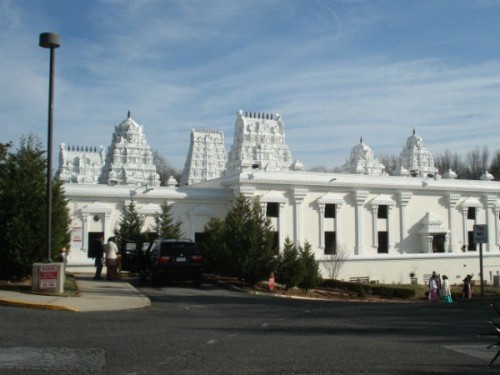 In the latest attack targeting Hindus places of worship, a temple in Washington State was vandalized on the eve of its planned celebration of Maha Shivaratri, according to media reports.

When members of the Hindu Temple Cultural Center in Bothell, 36 km from Seattle, went there on Sunday they found a swastika painted on it and “Get Out” scrawled in large letters with spray paint.

In the US, white supremacists have adopted the Nazi swastika as an ideological symbol. KING 5 TV, an NBC affiliated station in Seattle, said, “In Hinduism, swastikas signified peace long before it became a Nazi symbol. In this case, temple leaders say it’s now being used not just to hurt their believers but a neighborhood.”

“I was paranoid to say the truth, this just doesn’t look right to me,” temple member Jay Araman told Seattle’s KIRO TV, a CBS affiliate.

“He fears the red graffiti, sprawled across the outside of the temple, could be a sign that someone is planning something violent,” the station added. Echoing the fears, Thampipillai Thilakarjah told Q13 Fox TV station that his 11-year-old son was scared to visit the temple.

The Bothell Reporter newspaper reported that the incident was under investigation but no suspect has yet been identified according to Shari L. Ireton, a spokesperson for Snohomish County Sheriff.

“The timing of this crime, occurring before a major Hindu festival, warrants special attention from law enforcement,” said Jay Kansara, Hindu American Foundation’s Director of Government Relations. “We are encouraged by the ongoing thorough investigation of the Bothell City Police Department.”

There has been a spate of anti-Hindu across the US in recent months. In August a murti of Shiva at the Vishwa Bhavan Hindu Mandir in Georgia state was desecrated with black paint. The phone lines of the temple in Monroe, near Georgia, were cut and graffiti wits hate messages were written on it. The local sheriff’s office arrested two people in connection with the attack.

In response to these attacks, the US Justice Department has mandated the inclusion of anti-Hindu hate crimes as a category in crime-reporting forms starting in January.

In an incident involving an Indian, but not directly linked to his religion, 57-year-old Sureshbhai Patel was attacked by a police officer in Madison in Alabama state and left partially paralysed. The officer was dismissed from the police force.

In Bothell, a government-run school was also defaced with a swastika and the words, “Muslims Get Out,” according to Q13 Fox.