As “Baahubali – The Beginning” and “Bajrangi Bhaijaan” continue to garner enormous response at the box office, actor Riteish Deshmukh says it’s the “right call by the producers” to postpone the release date of his forthcoming comedy “Bangistan” to August 7, as the film “should get a fair chance”.

“The fact is that ‘Baahubali’ and ‘Bajrangi Bhaijaan’ are doing great business at the box office. I think it was the right call by the producers. A film should get a fair chance. If it is better for the film, then why not? I feel that by postponing the film by one week, probably we’ll have a better showcasing,” Riteish said.

Directed by Karan Anshuman, “Bangistan”, which was mostly shot in Poland and Ladakh, is about two suicide bombers, Hafeez Bin Ali Ishwarchand Sharma (Riteish) and Allah Rakha Khan Praveen Chaturvedi (Pulkit), who have been brainwashed into an explosive mission but eventually realise the death wish is futile exercise.

Q: Tell us about Bangistan?

A: Bangistan is basically a comedy satire about two terrorists that are on a mission to save the world. They are brainwashed by local religious rag-tags and sent on a mission to disrupt the world peace conference taking place in Krakow, Poland. On this journey they realize the futility of religious divide, and come out as Heroes. 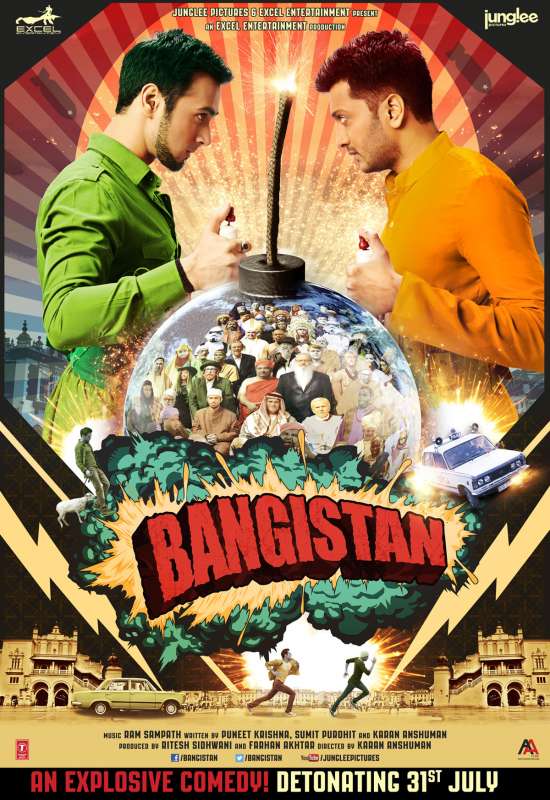 I play a Muslim from North Bangistan called Hafeez bin Ali, an introspective young man who has been brought up with an ultra-conservative Muslim background, where he works unhappily at a makeshift call center. He is frustrated by the stereotyping of Muslims throughout the world, and is a passive member of Al-Kaam Tamaam, a ragtag Islamic terror group of young Muslims, headed by the wily Abba Jaan. For this mission, Hafeez takes on a masked identity as a Hindu and trains for it accordingly.

As a country Bangistan is unique and fictitious, but the topic and the issues are real; it has a strong underlying message highlighting the futility of violence, religious divisions, cultural prejudice.

Q: What kind of comedy can we expect?

A: There are a lot of satirical jokes in the film as well as many spoofs. For example, ‘Star*sucks Coffee’ is there instead of Starbucks Coffee.  ‘Keep Calm, I Am Not A Terrorist’ T-shirts are also present and  McDonalds is replaced with “FcDonalds-Killer Fast Food”, and the statue of Mcdonald is replaced with that of a terrorist.

Q: Who will this film appeal to most?

A: I think it will have universal appeal perhaps with a bias towards the youth or millennial audience or more vocal.

Q:  What is the secret of delivering a great comedy performance?

A: I think that if you rehearse your comedy too much, then your performance will appear robotic and over practiced. So I think its better to just go with the flow and see how the situation is and act accordingly.

Q: Why should we all go watch Bangistan?

A: If you want to have some laugh at loud moments that at the same time make you think about the anarchy in the world then Bangistan is for you!