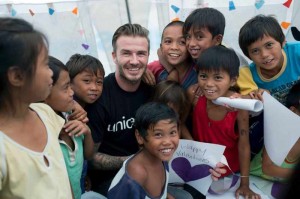 David Beckham will take to the stage at the BAFTA Awards ceremony along with actors Henry Cavill and Julie Walters to hand out an allocade.

Brunette beauty Hayley Atwell and Chris Evans, with whom she shared a lip kiss in “Captain America”, will be in attendance as well as “Game of Thrones” beauty Natalie Dormer and “The Hunger Games” hunk Sam Claflin.

Nominees who will attend the ceremony include Benedict Cumberbatch and Eddie Redmayne, who are competing in the Best Actor category, as well as Michael Keaton and Ralph Fiennes.

Redmayne’s leading lady in “The Theory of Everything” Felicity Jones, who has received a nod for Best Actress, will also be in attendance as well as Julianne Moore, Amy Adams and Rosamund Pike, who are up for the category.

Funnyman Stephen Fry, who tied the knot with Elliott Spencer last month, is to host the ceremony.