Gitanjali Multilingual Literary Circle (GMLC) a cultural organization in UK, dedicated to promote the richness of Indian languages and other literary activities recently celebrated its 20 years of service to Community. Asian Lite reports 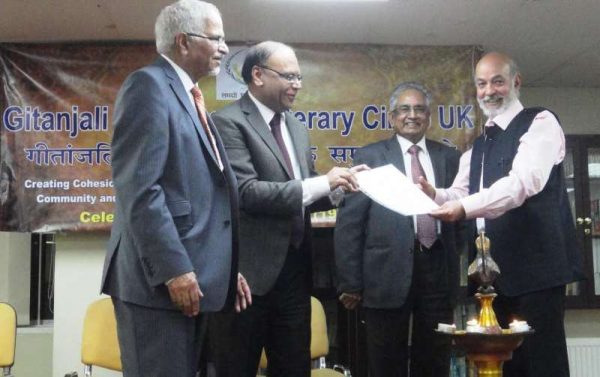 A programme of  Multilingual Poetry was organised by GMLC under the aegis of Mr. J.K.Sharma; Consul General of India in Birmingham in the premises of Consulate General in Birmingham.

GMLC honored Prof. Nathuram Puri, for his untiring and dedicated service to the underprivileged communities in India and the UK.

Gitanjali Multilingual Literay Circle was formed by Professor krishan Kumar and his friends  to commemorate the inspirational short life of a young girl, Gitanjali.  Over the years GMLC has organised several events in Midlands that have helped in bringing communities together.

The entertaining ‘poetry symposium’ conducted by Swaran Talwar. The well known poets had travelled from all parts of the UK, and included the popular poets such as Tejendra Sharma, Kadambari Mehra, Shikha Varshney, Satyavrat Sharma, Shail Agarwal, Nikhil Kaushik and some other members of Gitanjali Circle.

Professor Krishan Kumar, passed on the reigns of the Association to Dr Krishan Kanahiya, in the hope that the younger generation will continue with the high standard of community work promoting languages and social cohesiveness.