Director Shoojit Sircar’s slice-of-life family entertainer “Piku” has got a thumbs up not just from the film fraternity and critics, but also movie buffs. The medium budget film is steadily climbing the ladder of success at the box office and has collected over Rs.25 crore in its opening weekend.

The film, which released on May 8 across 1,300 screens in India and in around 200 screens globally, features megastar Amitabh Bachchan, Deepika Padukone and Irrfan Khan.

Commenting on the film’s unprecedented success, filmmaker Shoojit Sircar says, “It’s overwhelming to see the response from audiences across the globe. We are glad that Piku managed to touch hearts and bring smiles to faces. It was a great team work that has eventually paid off.”

“Piku” raked in Rs.5.32 crore on Friday, and witnessed a phenomenal growth via positive word-of-mouth on Saturday with Rs.8.70 crore and Rs.11.20 crore on Sunday — taking its combined total to Rs.25.22 crore in its opening weekend, according to trade analyst Taran Adarsh.

“Take a bow, Team #Piku… Just look at the REMARKABLE growth in the biz of #Piku. Proves yet again CONTENT is KING,” Adarsh tweeted on Monday.

The viewership of the film — which has ‘Motion Se Hi Emotion’ as its tagline — is only poised towards growth, say other industry members.

“The response has been superb till now,” Deepak Sharma, chief operating officer, PVR Pictures Ltd, said, and added that the movie went houseful over the weekend.

“It took a drastic jump in collection due to the word-of-mouth publicity since Friday. It’s too early to decide the future of ‘Piku’, but I think it will have a long run in cinemas,” Sharma added. 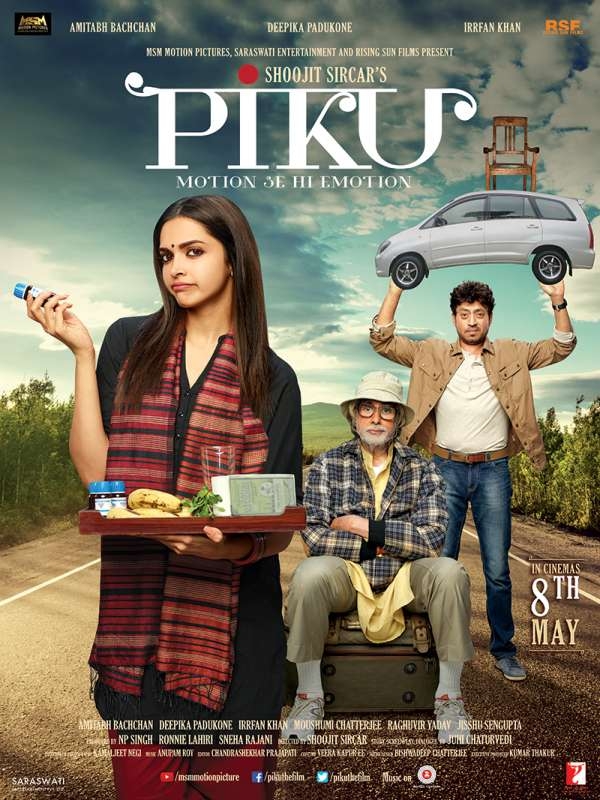 Devang Sampat, business head – Strategy, Cinepolis, said the film’s “appealing content and word of mouth is sure to attract and sustain the momentum of the weekend”.

“It is sure to sustain the footfalls for the weekdays as well. It has registered over 60 percent occupancy on an average over the weekend in all Cinepolis theatres,” Sampat added.

Served with dollops of comedy and emotions, “Piku”, which stresses on the camaraderie between a father (Amitabh) and daughter (Deepika), has received rave reviews. Even in theatres, it has spread loud cheers and applause by people of all age groups.

Sneha Rajani, Dy. President and Head, MSM Motion Pictures, comments, “Piku has shown yet again that content is the king. We are mighty pleased by its success worldwide, which we hope will continue in the weeks to come. Piku as a movie is all heart and we are glad that it has touched the right emotional chord. It’s been an exhilarating and a very memorable journey for all of us. We are thankful to the audiences worldwide for showering their love on the film!”

A limited screen release, the popular and critical acclaim of Piku has been attributed to a number of factors, from Shoojit Sircar’s “deft direction” to Juhi Chaturvedi’s “taut screenplay and dialogues”; from Deepika Padukone’s  “career best” and Amitabh Bachchan’s “legendary act” as Piku’s Baba to Irrfan Khan’s  “crackling on screen chemistry” with Deepika.

The Monday trends of the film are extremely good and at par with Friday and the film is expected to continue it’s dream run at the Box Office.

As far as the future of “Piku” on the box office is concerned, it will be interesting to see how well the film will do in upcoming weeks where it is likely to face stiff competition from Ranbir Kapoor and Anushka Sharma-starrer period crime drama film “Bombay Velvet”, which releases on Friday.

In the week thereafter, there is the much-awaited “Tanu Weds Manu Returns”.