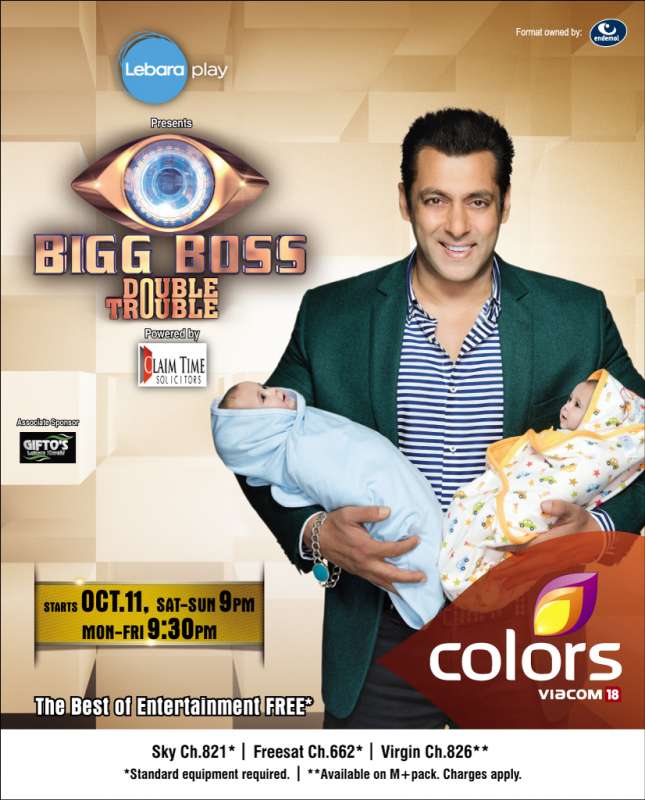 Colors has roped in Lebara play as the presenting sponsor, with Claim Time coming in as co-presenting, and Gifto’s and KGN Spring Water as an associate sponsor.

Bigg Boss is one of the highest watched reality shows amongst south-Asians living within in the UK. With A-list Bollywood star Salman Khan hosting once again this year, this season’s ‘double trouble’ theme surely
looks like it will be double the fun, madness and entertaining for the viewers.

Commenting on the launch of this season’s show, Govind Shahi, Business Head, IndiaCast Media, Europe, said: “Bigg Boss is one of our biggest programmes and the demand is tremendous. While presenting, powered by along with associate sponsorships are already sold, we have additional brands that have booked with us for every episode of Bigg Boss right throughout the series. Given the popularity of the programme it is but one of
the best buys on the channel.”

Raman Raikhy, Head of Sales, Indiacast Media, Europe comments on the popularity for the show amongst advertisers, “We had a whole lot of demand and actually had to choose between advertisers. We have gone with clients who we think will benefit the most from this association.”

Presenting Sponsor, Aditya Thakur, CEO, Lebara Play comments on his partnership with the show, “We’re delighted to partner with Colors to serve up some ‘double trouble’ Bigg Boss action. Don’t miss a minute of Season 9 on Lebara Play.”

Rizwan Shabir, Partner, ClaimTime Solicitors said: “Bigg Boss is an incredible program in terms of viewership and production, we at Claimtime Solicitors are excited to be associated with the program for the second year.”

Associate sponsor Gifto’s Owner, Faisal Ali, similarly shares his view on the partnership: “We are
delighted to be associated with Bigg Boss for the second year as this is the biggest show which we ever
sponsored with a huge awareness in our target audience. Looking for a great success this year too.”
Bigg Boss season 9 launch episode airs on Sunday 11th October at 9pm and will be available on Colors TV on
weekdays at 9:30pm and weekends at 9pm on Sky, Virgin and Freesat.