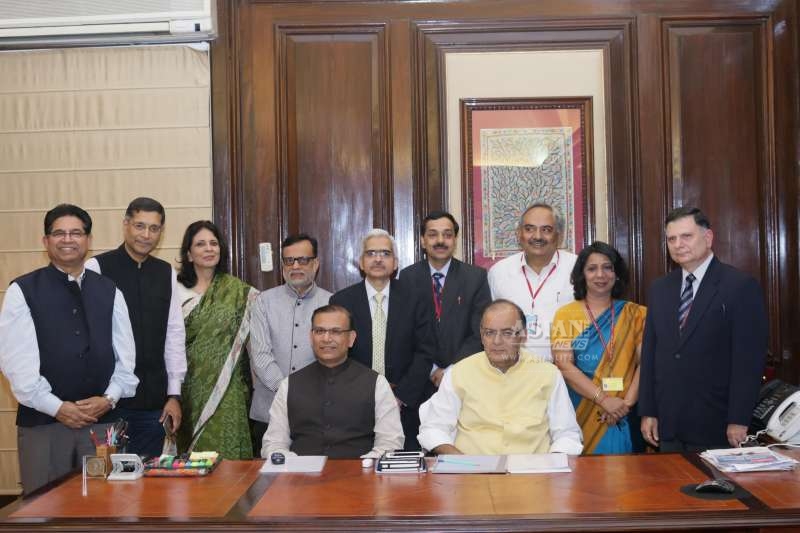 Falling just short of big bang reforms called for by his own economic survey, Finance Minister Arun Jaitley presented a Rs.17.78 lakh crore (nearly £200 billion) national budget for the next fiscal that seeks to put more money in the hands of the average citizen, tackle the menace of black money more effectively and end an era of “scam, scandal and corruption”.

In his 93-minute budget speech in the Lok Sabha, the finance minister said a new law on black money stashed abroad will call for an imprisonment of up to 10 years on its perpetrators with a penalty of 300 percent, while another proposed legislation will clamp down on benami property in India with both confiscation and prosecution. 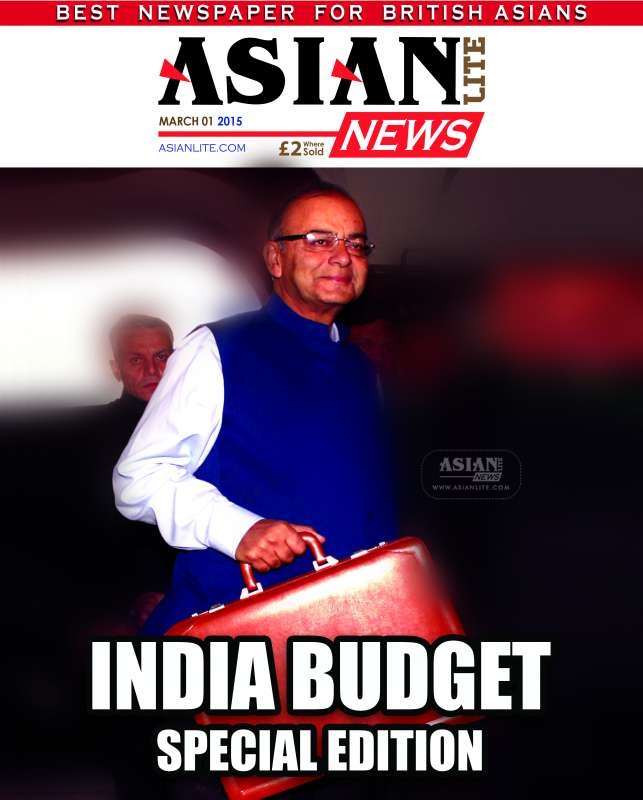 This apart, the 62-year old lawyer-politician also proposed a new public procurement law for the consideration of the house that can encourage transparency in the way government buys goods and services while removing the reluctance in decision-making among the bureaucracy due to the fear of being questioned later by probe agencies.

The finance minister said while individual tax payers would stand to gain as much as Rs.440,200 by way of enhanced exemptions he has proposed in his two budgets since July last year, the corporate sector can benefit from a cut in tax rates from 30 percent to 25 percent over four years, albeit with a sharp reduction in the exemptions.

Prime Minister Narendra Modi hailed the budget as progressive and practical which delivers on job creation, equity and growth. “Union budget 2015 is a budget with a clear vision. It is a budget that is progressive, positive, practical, pragmatic and prudent,” Modi tweeted.

The prime minister said it had a distinct focus on farmers, youth, poor and neo-middle class, while it laid down the goals over the next seven years on a host of areas such as housing for all, jobs, health, education and total electrification. It also signalled a stable, predictable and fair tax system, the prime minister added. 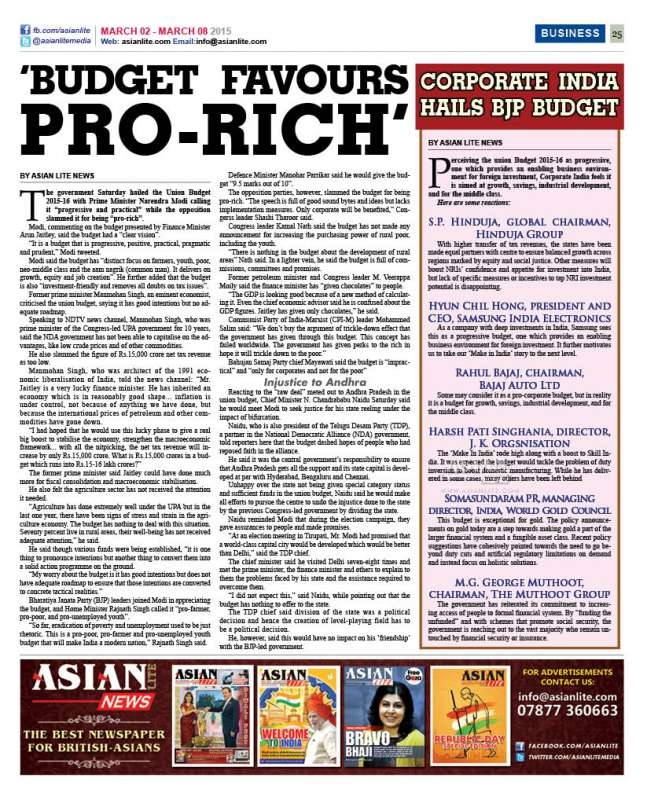 Industry, too, welcomed the proposals and said it will encourage investment with a better environment for doing business. The emphasis on infrastructure, agriculture, manufacturing and rural economy was particularly welcomed.

Regarding radical liberalisation suggested by the economic survey, Jaitley sought to give an explanation. “People who urge us to undertake big bang reforms also say that the Indian economy is a giant super tanker, or an elephant. An elephant, Madam Speaker, moves slowly but surely. Even our worst critics would admit that we have moved rapidly,” he said.

He also made several references to two of Prime Minister Modi’s pet projects, and said while policies outlined by him and various tax proposals were aimed to giving an impetus to “Make in India” campaign, particularly aimed at the youth and manufacturing, he also announced 100-percent tax rebate on money spent by the corporate sector towards the Swachh Bharat Abhiyan.

In the realm of taxation, Jaitley said wealth tax will be abolished, with a cess, instead, on the super rich, the service tax rate hiked, exemption limits for individual tax-payers significantly enhanced, notably in areas like insurance, excise and customs duty rationalised and corporate tax rate cut over four years from 30 percent to 25 percent, with the removal of a host of exemptions. 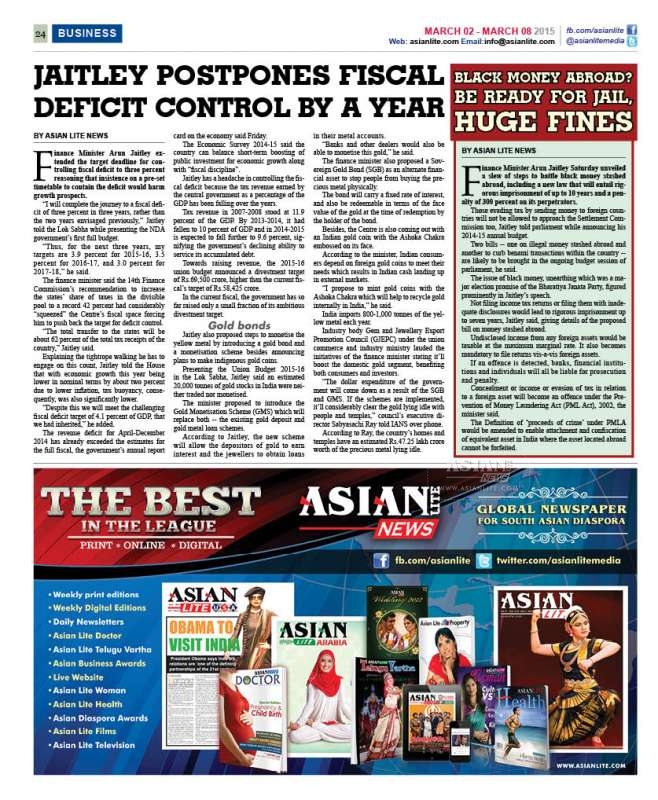 “My direct tax proposals would result in revenue loss of Rs.8,315 crore, whereas the proposals in indirect taxes are expected to yield Rs.23,383 crore. Thus, the net impact of all tax proposals would be revenue gain of Rs.15,068 crore,” the finance minister said, while also earmarking a target of Rs.41,000 crore from divestment of stake in state-run enterprises.

At the same time, the finance minister said that he was not losing sight of financial discipline, sticking to the fiscal deficit target of 4.1 percent of GDP for the current fiscal and 3.9 percent for the next, and pruning it further to 3.5 percent and 3 percent over another two fiscals.

This, despite a near 6 percent increase in the total expenditure at Rs.1,777,477 crore for the next year over the revised estimates for the current fiscal. But the size of plan expenditure, which forms the more productive use of finances, has been cut marginally by 0.5 percent to Rs.465,277 crore.

The finance minister began his speech on a positive note on the India economy and said it was logging the fastest-growth among larger countries, with inflation easing significantly over the past year. He was also quick to take this credit for his government.

Through the day, key stock market indices fluctuated wildly, after opening in the green. The sensitive index (Sensex) of the Bombay Stock Exchange (BSE) opened nearly 200 points, or 0.7 percent higher, but went into the red with a loss of nearly 340 points over the previous close.

Intra-day, the fluctuation was as wide as nearly 530 points. But by the end of the day, the 30-share key index managed to float back into positive territory with a gain of around 140 points, or nearly 0.5 percent over the previous close. The case was the same with the broad CNX Nifty of the National Stock Exchange (NSE), which finally ended with a gain of 0.65 percent.