Bradford-based charity QED (Quest for Economic Development) celebrates 25th years of excellent services to the communities this year. Asian Lite News look into their activities and talks to Mohammed Ali and Adeeba Malik who are spearheading the movement at one of the most deprived areas in the country….reports Asian Lite News

Some people see things as they are and say why?  Some see things that never were and say, why not?” Robert F Kennedy’s most famous quote is suitable to attribute to a tireless charity worker and his team in Bradford. When he became redundant from his role in a major UK charity, Mohammed Ali turned it into an opportunity. Much in the way he, and his dedicated team at the charity he went on to found, QED-UK, do for thousands of ethnic minorities, primarily British Muslims, today.

What does it stand for?

“Quest for Economic Development,” says its CEO, Dr Mohammed Ali OBE. “The ‘E’ can stand for education, employment or enterprise – all the things we work towards. It was hard work starting from scratch, but we had support from the local community and a breakthrough grant from the Tudor Trust meant I never looked back.”

Since then, QED has had the support of many hundreds of organisations and individuals across the UK and abroad, evidenced in the outpouring of support and praise to mark its Jubilee year.

Mr Imran Khan, Chairman of the Pakistani Justice Party, said: “I first heard of QED in 2005 when its founder and CEO, Mohammed Ali, suggested I became Chancellor of Bradford University. Ali was a Bradford University Council member at the time. I refused initially, but he was persistent and persuasive.

“I am glad he was. The role was a landmark one in my life.  It was also a position that assisted my work in establishing the Namal College in Pakistan. As someone committed to the power of education to transform lives, and society at large, I am indebted to QED for this opportunity. QED’s Silver Jubilee – a quarter of a century of helping redress inequality – is a landmark year I am honoured to celebrate, and I whole-heartedly offer them my respect and applause.

“QED do important work in the UK integrating ethnic minorities into British life. They are apolitical and professional in their approach, hence their deserved position of enviable respect amongst all communities. I wish them well for next 25 years.” 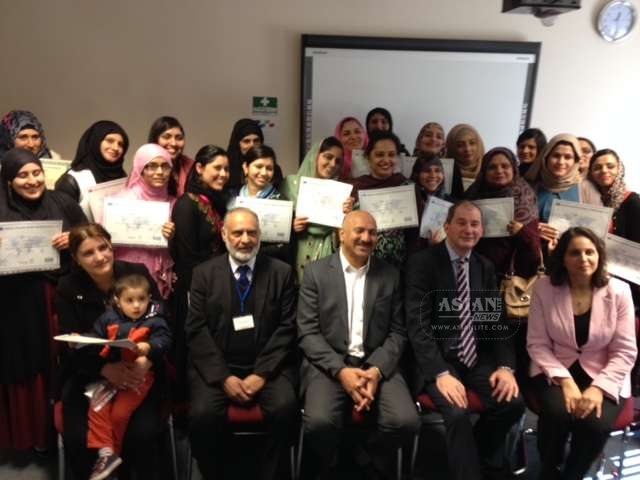 To date, the organisation has supported 30,000 people from ethnic minorities through education and training. It directly helps 1,000 people a year to integrate into British life and into work. As well as working with over 350 businesses to boost employee diversity, it’s invested more than £15m directly into disadvantaged ethnic communities.

‘Pioneering’ is a word often used for the organisation. As Lord Dholakia said: “Opportunities are at the centre of every person’s dream. No one wants to be born poor or disadvantaged yet the reality of life is that many people suffer from discrimination. Those that are the children of ethnic minorities settled here, even the grandchildren, are still unnecessarily and unfairly held back from having all the opportunities they should be entitled to. There are so many glass ceilings in our society that are stopping people being everything that they can be. This is where the QED comes in. They build the link with the communities to address the root cause of poverty and disadvantage. I congratulate them on the celebration of their 25th Anniversary.”

Mohammed Ali’s parents moved to Britain from Pakistan in 1969 to work in the textile mills. He was 13 and spoke no English. It was his father who pushed him into education to ensure his son achieved a good career after his many years of hard labour. He studied English language and went on to Huddersfield University and Bradford University.

Dr Ali is supported by the deputy CEO of QED, Adeeba Malik who joined the organisation in 1992. A trailblazer, she’s held many ministerial and non-ministerial board level appointments – usually the first Asian woman to serve. In 2004, she was awarded an MBE in the Queen’s Birthday Honours List for services to ethnic minority businesses, and in 2015, she received a CBE for her work on a regional and national level as a British Muslim woman in mainstream public bodies.

Her parents also moved to Britain from Pakistan and were working class.

“I’m an ethnic minority at a time in this country where we have been bombarded with anti-immigration rhetoric from all mainstream parties,” Adeeba said. “If any of us look about two, three or more generations back, chances are you’ll be an immigrant. Even the great British institution– Marks and Spencers – was founded by a refugee from Belarus.”

Adeeba has led on a QED project over the last six years working with Third Country National women with support from European Union Funds for integration of third country nationals, delivering language and integration courses.

“Whatever your views on immigration, it is as old as the hills in our British Isles. I want to explode a few myths, and stereotypes around the women immigrants I have met.”

Adeeba says, of the 340 women she’s helped with integration and language programmes, 100% felt learning English was crucial to a full social and economic life in Britain. The majority wanted to work.

She said: “Many of the women I spoke to are inspirational. They knew the value of life here. The freedom, the legal structure of gender equality, they didn’t enjoy in their home countries.”

What QED’s classes have given many – even those 40% who were well qualified in their home countries – was confidence. To speak English with their children, born here, and to engage with their teachers. To make doctors’ appointments, to learn to drive, be independent regardless of their husbands. And to pursue careers, whether it be as nurses or entrepreneurs.

This month (11 June) QED hosted an event where leading experts gathered in Islamabad, Pakistan, to discuss the economic and social crisis of British Pakistanis.

Representatives from major organisations including UNICEF, the Pakistan Alliance for Girls’ Education, the Imran Khan Foundation, Hashoo Foundation and Ministry of Planning Commission are just some of the 60 people expected to attend.

The discussion will result in recommendations for international organisations, charities and third sector organisations on how to improve British Pakistanis future.

QED also talked about their five years running EU funded pre-departure programmes for over 1000 women married to British nationals. This is to ensure they learn the language and know more about British values and way of life so it help their integration in UK when they come to join their husbands.

Dr Ali said, “There are 1.2 million British Pakistanis in the UK today. Across the UK, 22% of the population live in homes where income is less than half the national average. For minorities including Bangladeshis and Pakistanis, it is up to 60%. It’s crucial this poverty gap is addressed and we create a positive road map going forward.”

Dr Ali added: “We have come a long way in the last quarter-century and ethnic minorities are now represented in many occupations, sectors and walks of life in the UK. We believe that QED has been one of the leading organisations contributing to these positive developments. In 1990 we thought it would take no more than ten years for ethnic minority issues to become mainstream. We now know that this was very optimistic. Twenty-five years later and despite our many successes, there is still a long way to go to achieve our goal of an inclusive and diverse society.

“We look forward to the next quarter of a century, committed to turning challenges into opportunities. Prosperity and hope are vital to creating a cohesive and harmonious society.”