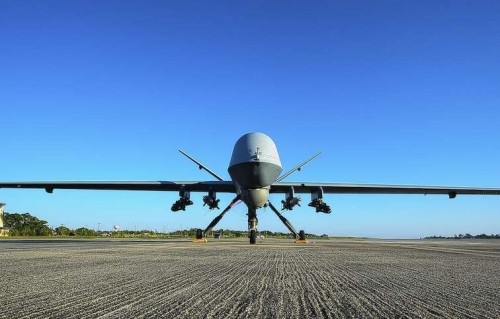 Britain’s Royal Air Force carried out 301 Reaper drone missions over Iraq between the start of UK operations against Isis last September and the end of March, firing a total of 102 Hellfire missiles on 87 separate occasions, according to new Ministry of Defence figures.

The numbers were obtained by the Drone Wars UK organisation, which also reveals today that RAF Tornados carried out 115 strikes in Iraq during the same period.

The figures suggest most drone missions have been for reconnaissance flights – gathering intelligence about ISIS positions in Iraq. Of the 184 Reaper missions that took place in Iraq between January and March this year, only 32, or 17%, involved drones firing weapons. On those missions the drones fired two missiles on average.

Britain joined the US-led international coalition against ISIS after a vote in Parliament at the end of last September. RAF drones fired their first weapon over Iraq just weeks later in October.

The MoD does not reveal any further details about these missions, including who or what may have been targeted or casualty rates.

The RAF has long maintained that it uses Reaper drones primarily for reconnaissance and surveillance, and that it fires weapons only rarely. In total the RAF fired weapons from Tornado bombers and Reaper drones on 202 occasions between September and March. Of those, drones were responsible for 43% of the attacks, or 87. Tornados struck 115 times.

The UK is one of nine countries bombing Iraq. The others are the US, France, Belgium, Canada, Australia, Denmark, Jordan and the Netherlands. In total this coalition carried out approximately 2,154 air strikes between September and April, according to the website Air Wars which is tracking the bombing campaign.