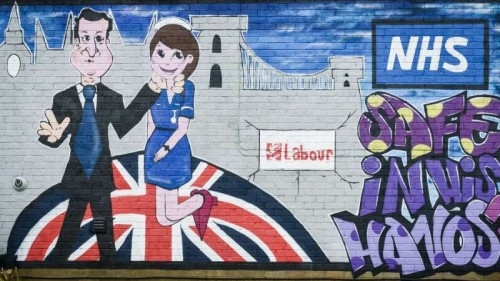 A man in Britain has been ordered by his local council to remove a 30 feet long and 10 feet high graffiti mural painted on a wall of his house depicting Prime Minister David Cameron throttling a nurse, a media report said .

Tony Davis, 73, received a notice of prosecution from the South Gloucestershire Council, after it was brought to the notice of the council’s enforcement team, British daily Mirror reported.

A caption on the right of the mural reads: “Safe in his hands?”

“On assessment, the planning enforcement team considered the mural to be an advertisement without the necessary prior advertisement consent and, as such, a standard letter was sent on April 28, requiring the removal of the advertisement in 14 days,” a spokesperson for the council was quoted as saying.

Davis, a Labour supporter, commissioned a street artist to create the giant work on his property.

“I’ve had a notice of prosecution. If you are a commercial premises you can advertise anything but if you are a private premises you are restricted to a size of two feet by three feet. But this applies to hoardings — not something that is painted on the wall like mine is,” he said.

The council said that if he refused to remove the mural, he could be fined up to 20,000 pounds (over $31,400) under the Town and Country Planning Act.