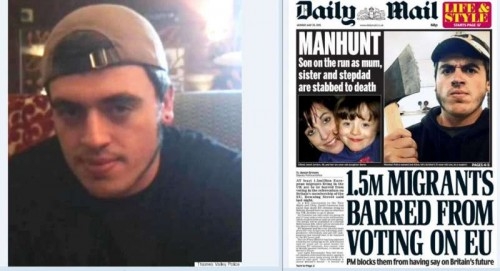 Detectives who were searching for Jed Allen say they are satisfied that a body found in Oxford is that of the triple-murder suspect.

Members of the public found the body in the woodland,bringing to an end a 30-hour manhunt.

No formal identification has yet taken place reports Sky News.

Allen, who had a distinctive spider tattoo on his left hand, was being hunted after his young sister, mother and her partner were found stabbed to death at their Didcot home.

The bodies of Derin Jordon, aged six, Janet Jordon, 48, and her partner Philip Howard, 44, were discovered in the house in Vicarage Road, Didcot.

The murders sparked a massive manhunt in Oxfordshire, involving about 100 police, some of them armed.

Police had released CCTV pictures of Allen at Oxford railway station’s WHSmith store taken just hours after he was thought to have killed his family members.