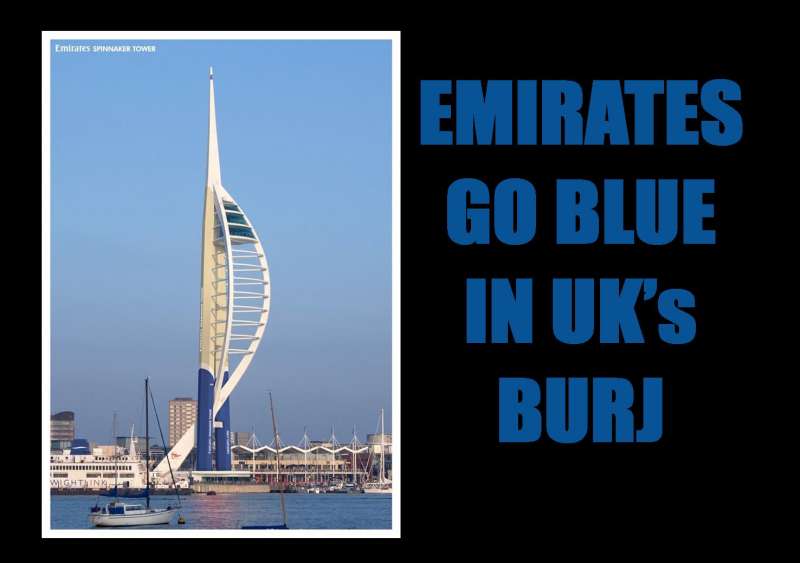 The Dubai-based airlines agreed to change its colour to blue.Blue is the traditional colour of the city of Portsmouth and its football team.

Sir Tim Clark, President of Emirates said: “We listened to the feedback and worked with the council to adapt the designs in order to create something that Portsmouth residents will be proud of.”

More than 100 litres of red paint, bought in readiness for the work, will now be given away to good causes, BBC reported.

The city council strike a £3.5m deal with Emirates to rebrand the Spinnaker Tower earlier this month. Emirates will be the first ever sponsor of the Tower which will be rebranded as Emirates Spinnaker Tower from July 2015.

The decision upset 10,000 people who signed a petition against a branding plan as red and white are the colours of football rivals Southampton.

Donna Jones, leader of Portsmouth City Council said: “We have listened to the public and created a new blue, gold and white design that is in keeping with suggestions from residents.

“[It] gives us a unique opportunity to promote Portsmouth around the world.”

She said there was “no change at all to the financial deal” following the U-turn.

“We wouldn’t have to do any of this if we weren’t so desperately short of money. We have a primary school places crisis at the moment – this money is going towards building new classrooms.”

However Portsmouth’s Liberal Democrat opposition said the saga had made the city the “laughing stock of the country”.

Councillor Ben Dowling said: “It’s good that the new design isn’t red but we still have some fairly serious questions about the process that has taken place.

“Most Portsmouth people are asking ‘why didn’t we just get asked in the first place?’ – someone surely would have pointed out that red wasn’t the best idea.”

The council said 115 litres of red paint already purchased by the airline would be made available to charities and community organisations in Hampshire.

Sir Tim Clark, President of Emirates Airline said: “As the most prominent landmark in Portsmouth we are honoured to be the inaugural sponsor of Emirates Spinnaker Tower.”

“This sponsorship represents our vested interest in the UK where we currently operate 16 daily flights and where we are responsible for injecting and stimulating over £2.1 billion into the country’s GDP each year. Part of the reason that this sponsorship opportunity was so appealing to us is that it will enable the local City Council to reinvest this partnership money into the local community, something that we are proud to be able to support.”

Emirates’ relationship with the tower is a massive boost for Portsmouth and the partnership will also see the city promoted to potential visitors across the world through additional Emirates marketing.

The prominent new branding is expected to be in place in time for the arrival of the America’s Cup World Series in Portsmouth from 23-26 July. Emirates already has close ties with the America’s Cup, as sponsor of Emirates Team New Zealand, one of the challengers for the 35th America’s Cup.

In addition to the airline’s UK based sport sponsorships Emirates is also the sponsor of the Emirates Air Line, London’s popular cable car across the Thames. In total Emirates invests over £70million into its various UK sponsorship properties each year.

The UK is Emirates’ largest European market with 112 weekly flights spanning the breadth of the country via six gateways including; London Heathrow, London Gatwick, Birmingham, Newcastle, Manchester and Glasgow.