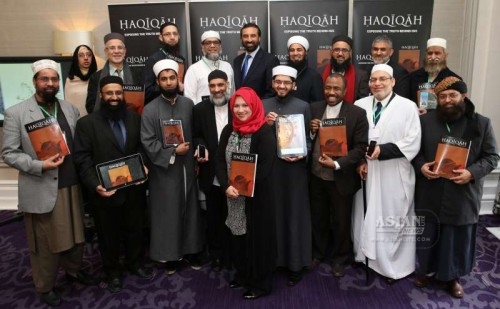 Leading Imams from Britain and Europe gathered in London to condemn the atrocities taking place in the name of Islam and issued an appeal to the community to reclaim the ‘digital space from those who wish to tarnish their faith.’

Over 120  Imams attended the summit in London and released  a digital magazine to promote the truce face of Islam and  promoting their campaign against extremism.

threat of extremism and radicalisation within the UK and Europe. Sevral young students in London and cities were travelled to join the extremist forces in Iraq and Syria, Asian Lite newspaper reported.

Shaukat Warraich, Chief Editor of Imamsonline.com, an organisation providing a voice for Islamic religious leaders, and host of the Imams Online Digital Summit, said: “The magazine ‘Haqiqah’ which translates as ‘The Reality’ is aimed at young people and will counter the extremist narrative used by groups such as ISIS.”

the Islamic faith. Bringing together more than 700 Imams and Mosques from across the UK, Imams Online has become the first port of call for anyone wishing to find out more about the religion.

The digital magazine, developed with contribution from Imams and scholars will deliver a clear and positive message for readers with information that they can share easily across their social media network. Highlights of the magazine include a section providing ‘correct’ context to specific verses of the Quran, regularly twisted in extremist material.

Qari Asim, Senior Editor of Imamsonline.com and contributor to the magazine added: “We are reclaiming the online space, but we need absolutely everyone to get involved in this effort. So this is a call to log on, get informed, and share the magazine with all your friends and family online.”

The summit was honoured by the attendance of various highly respected Imams including, Sheikh Abdallah Bin Bayyah, President of the Forum for Promoting Peace, and Hamza Yusuf, leading US Imam and co-founder of California based Zaytuna College.

Warriach concluded: “We’re turning the tide – though we still have a way to go, we know that by taking efforts to support and mobilise the huge online Muslim population we will eventually drown out the violent voices”.