Dr Zubair Medammal is the first Indian to get research degree  in the study of falcons. The enthusiastic falconologist from south Indian state of Kerala has not only established himself in the trade and done research on the subject but has also shot a documentary on the rare species of bird in the Middle East…reports COT Azeez for Asian Lite News

Passion and dedication are two drives that not only push one to reach certain goal but to strive for higher excellence that will continue until satisfaction achieved. An Indian academic passionate about falconry has carved a niche for himself.

Zubair Medammal is the first Indian to get research degree   in the study of falcons. The enthusiastic falconologist from Kerala has not only established himself in the trade and done research on the subject but has also shot a documentary on the rare species of bird in the gulf.

Falconry considered as a rich heritage and the bird is a status symbol among in Arab tribes in Saudi Arabia and other Gulf countries. The bird has a passport embedded with microchip that enables it to travel across the region except Oman

The falconologist came to Saudi Arabia recently to shoot a documentary titled “Falcons and Falconry in the Arabian Gulf” in English, Arabic and Malayalam languages. After finishing shooting of the 45-minute documentary segments in Oman and UAE, he came to Kingdom.

Zubair have an interesting story to tell behind the flowering of his unique passion. Like numerous folks hailing from Kerala he too had tried his luck for a job in the U.A.E.

“As I was going to Al Ain from Abu Dhabi in UAE in 1995, I found signboard put up by Shaikh Zayed Falcon Research Center and Hospital, but when I approached the center for a job there which was promptly declined. I begged for any position – I was even ready to work as a sweeper – but my request was turned down in a humiliating manner,” says Zubair.
Perceiving it as a challenge, he studied and trained in falconry (including artificial breeding) in Germany. It was, ironical that he was denied opportunity by a German official when applied at the Shaikh Zayed Falcon Center.
The documentary covers all relevant information about various species of this prized bird and their characteristic features as well as about falconry, with subtitles such as hunting, feeding, breeding, health and healthcare, roosting,   vocalization, training and taming. Zubair made a sonogram of 15 different vocalizations of various species of the raptor. Prince Faisal bin Musaed released a brochure on the documentary in Jeddah few days ago.
Zubair’s doctoral research topic was “Biology and behavior of falcons with emphasis on breeding and healthcare in captivity.” He obtained a doctorate degree from the University of Calicut in the southern Indian state of Kerala in 2004, where he is currently working as assistant professor of zoology and special officer at department of environmental sciences.  The fruit of his labour is a web site devoted to falcons, birds known to be great hunters of prey, and has induced a rich Arab tradition of falconry.
Apart from the Gulf countries, Zubair visited Germany, Pakistan, Sri Lanka and Iran, besides spending months in Silent Valley hills along the Western Ghats in Kerala as part of his research work. The falcon has always been regarded as a very uncommon and shy bird, and it is very rarely observed by amateur birdwatchers. Falcons usually prey on small birds such as   pigeon, and quail. Apart from hunting purposes, Zubair said, falcons could be used to drive away crows and other birds that disturb traffic as well as birds that pose a threat to passenger planes.

Last year he was assigned to investigate causes of bird hits at Kozhikode airport and found that in the specific case of an Air India aircraft the real cause for the mishap was ‘palm civet’, a nocturnal mammal. Subsequently, he was appointed by the Airport Authority of India (AAI) to study and suggest steps to avoid ‘bird hits’ in the Kozhikode International Airport.

Dr. Zubair has suggested that trained falcons can fend off other birds. “I have submitted a major project proposal to the AAI to resolve this issue,” he says. Falcons were used to protect Dubai’s tallest building from birds, which leave their droppings on the top of the building, he added. 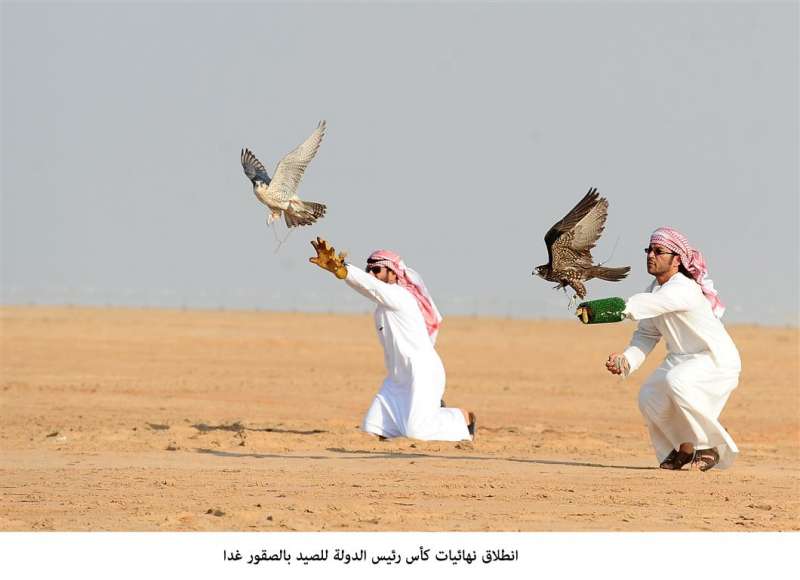