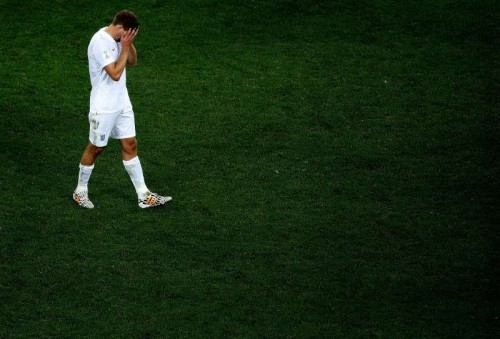 Outgoing Liverpool captain Steven Gerrard scored the team’s only goal in what was one of the worst-ever defeats for the Anfield outfit in modern history, a 6-1 massacre by Stoke City.

It was at least a consolation prize for the 34-year-old midfielder who led the team to their crushing defeat in the final game of the 2014-15 season.

This summer, Gerrard heads across the Atlantic at the start of an 18-month contract with LA Galaxy.

The Anfield legend had hoped his final days would reward Liverpool with a place in England’s greatest football competition, the FA Cup, and also making the top four in the Premiership League table.

Both honours were denied, halting Gerrard’s dreams of leaving on a high after nearly 17 years at the club.

The team just about managed to make it to the sixth position on the table, giving them a place in the Europa League contest nest season.

The clock has to be turned back over half a century to find Liverpool suffering a such a humiliating scoreline.

One radio commentator described Gerrard walking off the pitch at Stoke looking sad and lonely in what was his farewell.

Ironically for Gerrard, his final game wearing a red shirt came almost 10 years to the day which marked the highlight of career. On May 25, 2005, Liverpool won football’s greatest prize, the European Cup.

Liverpool reclaimed their crown as “Kings of Europe” after miraculously overcoming a 3-0 half-time deficit to defeat AC Milan at the Ataturk Stadium in Istanbul.

It was the Reds first appearance in a European Cup final for 20 years, with Gerrard leading his team in the final as overwhelming underdogs.

It was described as one of the most amazing comebacks, ever, in football.