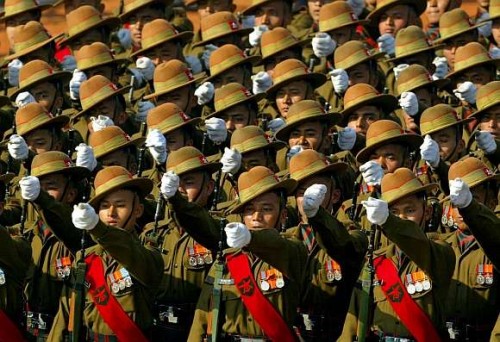 The Queen and other members of the Royal Family  joined hundreds of Gurkhas marking the regiment’s 200 years of service to the British Crown.

The event, in the grounds of the Royal Hospital Chelsea in London, is the highlight of a year of celebrations marking the anniversary.

The evening featured battle re-enactments and musical performances by the Band of the Brigade of Gurkhas reports BBC.

Victims of the recent Nepal earthquakes were remembered in a minute’s silence.

The Queen was accompanied by Prince Philip, while Prince Charles – Colonel-in-Chief of the Royal Gurkha Rifles – and Prince Harry – who lived with a Gurkha battalion in Afghanistan – also attended the event.

The Sultan of Brunei was among the other dignitaries invited to the Gurkha 200 pageant.

The 1,400 guests watched the open-air event, which chronicled 200 years of Gurkha service with the “story of the Gurkha soldier”.

It was narrated by historian Dan Snow and actress Joanna Lumley, who campaigned to allow Gurkhas settlement rights in the UK in 2009.

The Queen was also introduced to veterans and serving Gurkhas and was shown artefacts from the regiment’s history.