One of India’s greatest painters of modern times, the snowy-haired and bearded, barefoot Maqbool Fida Husain – who died in self-exile in London four years ago — is a forgotten figure on his birth centenary on Thursday (September 17).

Barring a Google doodle viewed globally and an art retrospective being held in Dubai, nobody seemed aware of the momentous day in his native country, or even his birthplace, the small temple town of Pandharpur in Maharashtra’s Solapur district where he was born this day in 1915.

“I recall he was remembered and covered widely on his first death anniversary in 2012… but it is sad that today there is hardly any event being held to commemorate his birth centenary,” Husain’s official biographer and friend for long, Khalid Mohamed, told IANS.

A legendary Bollywood chronicler and filmmaker himself, Mohamed wrote: “A retrospective of his work would have been in order, but if there is any such event on in Mumbai – the city where he spent the best years of his life – it’s been a closely guarded secret.” 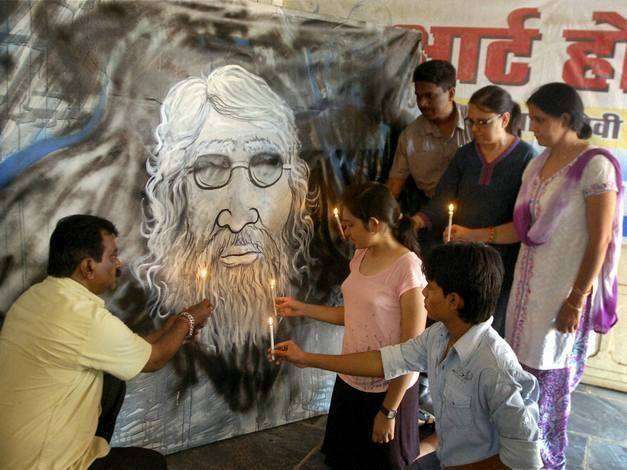 Renowned equally for his artistry and eccentricities, the internationally acclaimed artist is credited with catapulting Indian art to the world arena — though he was hounded by a spate of controversies virtually all his life.

Once hailed as India’s ‘Pablo Picasso’ by the Forbes magazine, Husain is largely remembered among the Indian masses for his paintings depicting prancing horses, women subjects, historical figures and nude paintings of Hindu gods and goddesses, besides other events.

His portrayal of horses with their “tremendous lines and the majestic way that the horses held their heads high” – as Sotheby’s specialist in South Asian modern and contemporary art Priyanka Mathew once said – were held amongst his most sought after and highly-priced collections.

The ‘women’ in his life ranged from the beautiful Queen Mahamaya, mother of Lord Buddha, to the venerable Mother Teresa to the vivacious Madhuri Dixit.

His series on women and Hindu goddesses Durga and Saraswati, besides Mahatma Gandhi, the British Raj and epics Mahabharata and Ramayana are coveted even today and command astounding prices among art lovers the world over.

Husain’s nude and semi-nude portrayal of Hindu deities earned him the ire of Hindu fanatic groups, which attacked his home, ran amuck at his exhibition venues, lodged police and court cases against him and finally compelled him to flee India in 2006 — never to return till he died on June 9, 2011.

Though Husain yearned to return home from his self-imposed exile, he dreaded the very thought of spending even a night in jail or facing the plethora of court cases lodged against him.

Even the Muslim community – though he was born a Sulaymani Bohra, of Shia origins – did not spare him when it castigated him for a qawwali number in his movie ‘Meenaxi: A Tale of Three Cities’ (starring national award winning actress Tabu).

Muslim groups contended that certain words referring to divine beauty in the qawwali were lifted directly from the Holy Quran and hence was blasphemous. Following waves of protests from Muslims, the movie — though critically acclaimed and winner of many awards — was yanked out of cinemas.

In the midst of the controversies over his paintings, Husain shot to limelight in 2004 when he signed a Rs.100 crore deal to make 100 paintings for a Mumbai businessman Guru S. Srivastava.

However, the deal only partly fructified to around 25 paintings for Rs.25 crore — as Husain left India and Srivastava got embroiled in a controversy over unpaid bank loans.

It was way back in the 1930s that the tall, young Husain rejected a prospective job as a tailor’s assistant to paint cinema hoardings in Mumbai for a paltry 25-35 paise per square foot — and this ultimately proved to be his art school, college and university.

Earning recognition quickly, he joined, in 1948, the famous artist F.N. Souza’s Progress Artists Group, a conglomeration of aspiring young painters with a desire to create an Indian version of modernist art in those struggling days of India as a newly-independent country.

Over the years, as India progressed from a bullock-cart economy to a nuclear power and space power, Husain grew from a painter of hoardings to a world-class painter, drawing the world’s attention to Indian art and conferring it with an unprecedented status and respectability.

Referring to the unfinished official biography commissioned by Husain, Mohamed said that with the artist not around anymore, “it would not be proper to pen his biography – though I have a huge collection of notes, tapes and other material on him”.