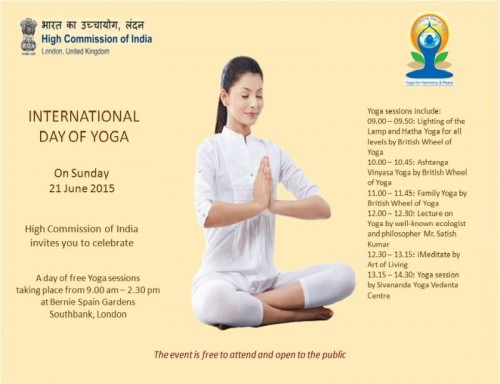 21st June has been declared as the International Day of Yoga by the United Nations with the support of UK and 176 other countries.   This followed an initiative by Prime Minister of India calling for international recognition to yoga, the physical, mental and spiritual practice, which can change lifestyles, create consciousness, and help deal with climate change.

The International Day of Yoga is being celebrated all over the world on 21st June and the Prime Minister Mr. Narendra Modi will take the lead in launching the commemoration in India.

In the UK, the day will witness celebrations organised by over 30 yoga and cultural institutions all across the country (list attached).  It will be launched in London on 21st June by the High Commission and the Government of India Tourist Office in an event we are organising in collaboration with the British Wheel of Yoga, Sivananda Vedanta Centre and Art of Living Foundation.

The launch event will be held at Bernie-Spain Garden, close to the OXO Tower on south bank of Thames on 21 June from 0900 to 1430 hours.  It will commence with the lighting of a lamp followed by speeches and exercises and include a lecture by the eminent Ecologist and Philosopher Mr. Satish Kumar “Yoga – The Way of Life”.   The event is open to the public.