Khushi Kaur, a student of the Westfield Academy, won praises from the judges and the audience for her culinary  skills at the CBBC Junior Bake Off 2015 competition…. reports Asian Lite News

She may have missed out on the quarter finals of the Junior Bake Off – but a cheery young baker of Indian-origin is now putting in the practice for the grown-up version of the hit TV show.

Talented Khushi Kaur has now set her sights on entering the Great British Bake-Off, even though she will have to wait five years to audition.

The Westfield Academy pupil beat several thousand youngsters to make it to the Bake Off marquee in the quarter-final of the CBBC programme.

Kushi said: “It was disappointing to miss out on the quarter final, however, even getting onto the show and being filmed in the iconic Bake Off marquee was beyond my expectations. It was an incredible experience, which I’ll always remember and I will practice anything and everything I can until I’m old enough to apply for the Great British Bake Off, which I’m sure mum will be pleased about as she gets to eat it all. But before that, I have set my eyes on Junior Master Chef next year!”

Her mum Kiran told Asian Lite: “Khushi has done phenomenally well and I am extremely proud of her – especially when I have always seen Khushi being more of a Cook than a baker. I am pretty sure she has got her Grandma’s genes as she used to be a bake too.”

Khushi’s multicultural background is a big factor in the type of bakes that she makes.  She began baking at the age of seven with her mum.  Khushi has lots of hobbies such as drawing, art, photography, playing the piano and blogging. She dreams one day of owning a Michelin Starred Restaurant, International Food & Travel Photographer and have her on magazine.

Junior Bake Off is back for a brand new 15-part series, hosted by Sam Nixon and Mark Rhodes.  Judges, top international chef, Allegra McEvedy and executive pastry chef Graham Hornigold will be testing 40 of Britain’s best young bakers over a series of 10 heats followed by a knock-out week of finals.  In each heat four bakers will face 2 challenges:  the Technical and the Showstopper before one of them goes through to the next round. 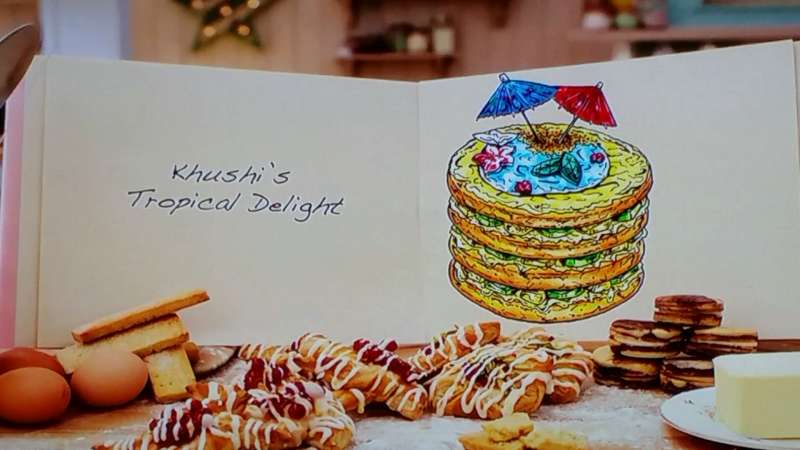