Japan’s TBS network showed the 34-year-old entering the iconic Albert Hall on Wednesday, in leather jacket and sunglasses and accompanied by a woman, and bodyguards who prevented people photographing him.

Other images showed him clapping during a performance by Eric Clapton, possibly Kim Jong-chol’s first public appearance since his brother Kim Jong-un took power in December 2011. 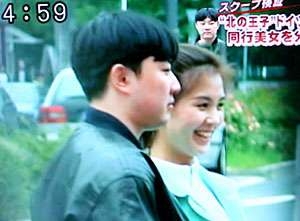 Kim is a long-time fan of the British guitarist-singer and was previously spotted at his concerts in Germany in 2006 and Singapore in 2011.

In 2009, he invited Clapton to perform in Pyongyang but no concert ever eventuated, according to South Korean media.

Known for his Western lifestyle and love of NBA basketball and pop music, Kim Jong-chol was considered too effeminate to be North Korea’s leader by his father Kim Jong-il, who also overlooked his oldest son Kim Jong-nam to anoint Kim Jong-un as his chosen successor.

Kim Jong-chol was the first child born to the late North Korean leader and his third wife Ko Young-hee.