Rehman Chishti MP, who has led a campaign to convince the Government to officially adopt the term Daesh has welcome the Prime Minister’s statement …reports Asian Lite News 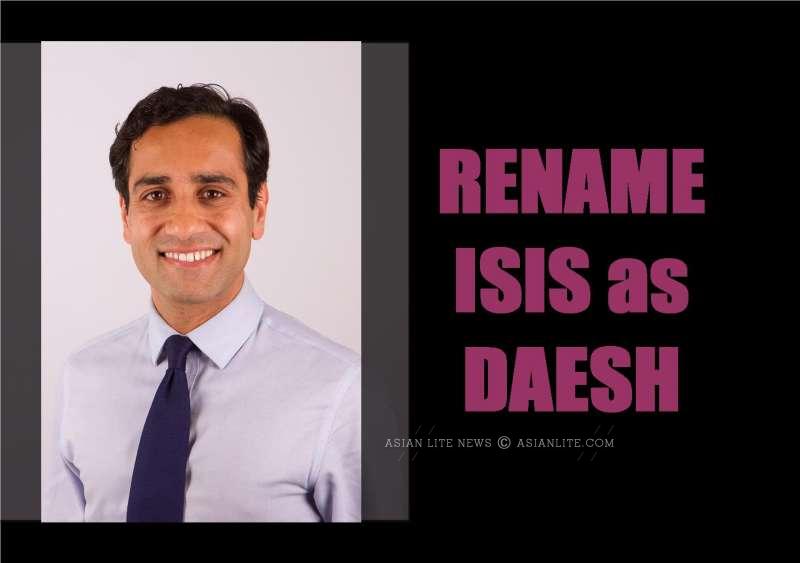 Now it is the turn for BBC to call Islamic State as Daesh. Mr Rehman Chishti, MP for Gillingham and Rainham,  along with 170 other parliamentarians are campaigning to call the terror outfit ISIS as Daesh.

Prime Minister David Cameron said in Parliament: “Having carefully considered the strong representations made to me by the honourable member from Gillingham and Rainham, having listened to many members of Parliament from across the House, I feel it is time to follow our key ally France, the Arab League, and other members of the international community, in using as frequently as possible, the terminology Daesh, rather than ISIL. Because frankly this evil death cult is neither a true representation of Islam nor is it a state.”

Mr Chishti’s campaign has received the support of 170 Members of Parliament from across the political spectrum.

Many countries around the World, including Turkey, Australia and the Arab League have already adopted the phrase “Daesh” instead of using Islamic State, ISIL or ISIS. Last year the French Government officially adopted the title ‘Daesh’ and urged media outlets to use this name instead.

The word ‘Daesh’, which is an Arabic name for the group, holds negative connotations, referring to “one who sows discord”.

Mr Chishti again, on the floor of the House, asked the Prime Minister to support him in urging the BBC to now review their position and use Daesh and now urges all to now follow suit to help defeat this evil organisation’s self-proclaimed legitimacy, appeal and poisonous ideology.

Mr Chishti thanked all Members of Parliament from across the House for their support in achieving this.

Mr Chishti said: “I am delighted that the Government will now be joining our key international allies in using the term Daesh to defeat this evil organisation’s propaganda, appeal and self-proclaimed legitimacy.

“The Prime Minister has listened to the strength of feeling across Parliament, with this campaign being supported by 170 MPs from across the political spectrum. This barbaric terrorist group is not Islamic nor is it a state and Daesh is a better term for it.    I hope that media organisations will now follow the Government’s lead and also adopt the term.”

The BBC earlier rejected calls to drop the use of the term ‘Islamic State’ in reports.

In a response to the Chishti campaign, Lord Hall of Birkenhead warned that using an alternative would be “pejorative”. But he accepted using the term ‘Islamic State’ on its own could be misleading and insisted the BBC would “redouble our efforts” to use caveats such as “so called Islamic State group”.

Lord Hall wrote in The Times: “The BBC takes a common sense view when deciding how to describe organisations, we take our cue from the organisation’s description of itself.

“We have recognised that used on its own the name Islamic State could suggest that such a state exists and such an interpretation is misleading. So we have caveated the name “Islamic State” with words which qualify it eg “so called Islamic State”.”