Leicester city MPs, the council and local HIV Charities have signed up to halve the number of people being diagnosed late with the condition by 2020. Though HIV is no longer a life threatening condition, the early it is detected the easier it is to manage and get treated- which also makes the risk of passing on the virus to others much lower.

Leicester has the 6th highest rate of late diagnosis of HIV in the country. 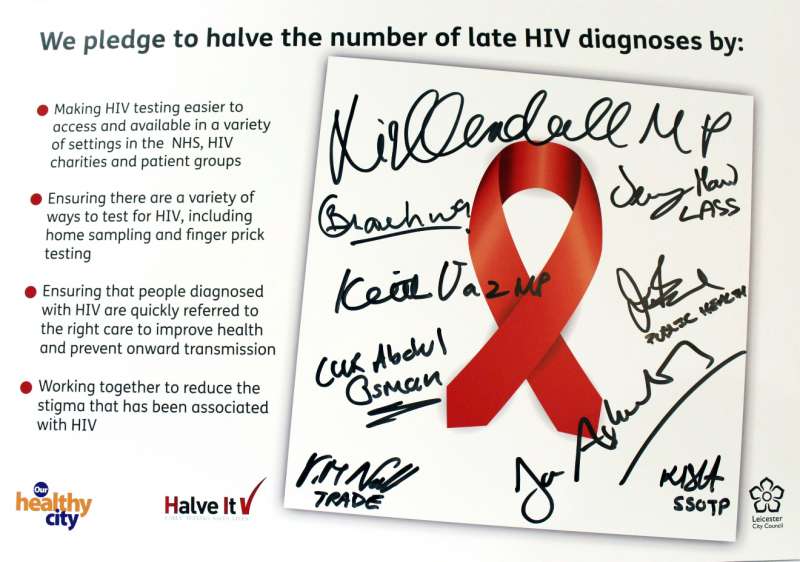 The pledge commits to making HIV testing easier to access and available in a variety of settings in the NHS, HIV charities and patient groups; ensuring there are a variety of ways to test for HIV, including home sampling and finger prick testing; ensuring that people diagnosed with HIV are quickly referred to the right care to improve health and prevent onward transmission and working together to reduce the stigma that has been associated with HIV

Leicester East MP Keith Vaz said: “I welcome the fantastic work being done by LASS to promote HIV testing and fully support the important campaign to halve the late diagnoses of the virus in Leicester, and across the world. It is vital that more and more people become aware that testing is free and simple.  Enabling greater access to information around HIV and how it is contracted, tested for and managed is critical in reducing the spread of this virus.”

Assistant city mayor Cllr Abdul Osman, executive lead for public health for Leicester said: “HIV testing is quick free and easy. We would urge people who think that they may have contracted HIV to take a test. “It’s better to know and get treatment early. Testing and treatment remain confidential and available via the NHS”

Jenny Hand, CEO of LASS “We’re delighted to see such strong support for this campaign. At LASS we see the impact of late diagnosis of HIV. HIV isn’t a death sentence – if caught in time people can live long and healthy lives. But we need people to be tested so we can provide the appropriate treatment, care and support.”

Leicester is home to 2 of the 7 Public Health England innovation projects which have been funded to support an increase in HIV testing and improvements in enabling people to test early and reduce late diagnosis. Well for Living ( LASS Social Enterprise) is co-ordinating a regional project which will take HIV testing along with other health awareness out to workplaces along the MI , targeting male workers who don’t often have time to get to health appointments.

Trade has designed a project to raise the standards of sexual health and HIV testing through establishing a Sauna online assessment project (SOAP).