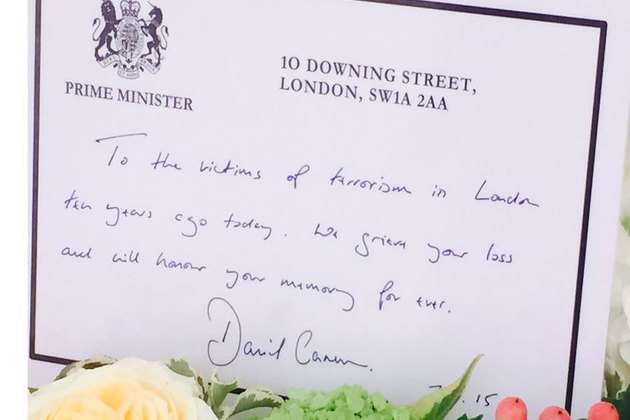 Flowers have been laid in memory of the 52 people killed in the bombings – 10 years to the hour since suicide bombers began the attacks.

The bombings of three Tube trains and a bus – carried out by four bombers linked to al-Qaeda and carrying rucksacks of explosives – was the worst single terrorist atrocity on British soil.

Cameron in a statement said: Today the country comes together to remember the victims of one of the deadliest terrorist atrocities on mainland Britain.

“Ten years on from the 7/7 London attacks, the threat from terrorism continues to be as real as it is deadly – the murder of 30 innocent Britons whilst holidaying in Tunisia is a brutal reminder of that fact. But we will never be cowed by terrorism.

“We will keep on doing all that we can to keep the British public safe, protecting vulnerable young minds from others’ extremist beliefs and promoting the shared values of tolerance, love and respect that make Britain so great.

A series of events has been organised in memory and honour of the people killed and injured and their families, and to the first responders and other members of the public who were intimately involved in the attacks and their aftermath.

The survivors and the families of the 52 victims of the bombings attended a service of commemoration at St Paul’s Cathedral. They were joined by staff from Transport for London, the Metropolitan Police Service, London Fire Brigade, London Ambulance Service, British Transport Police, the City of London Police and the London based NHS representatives who were involved in the 2005 events.