The Muslim Jewish Forum of Greater Manchester, established in 2005, has just commemorated its 10’Th anniversary with a glittering dinner on Sunday 7 June 2015 hosted by Manchester Town Hall attended by many civic dignitaries….reports Asian Lite News 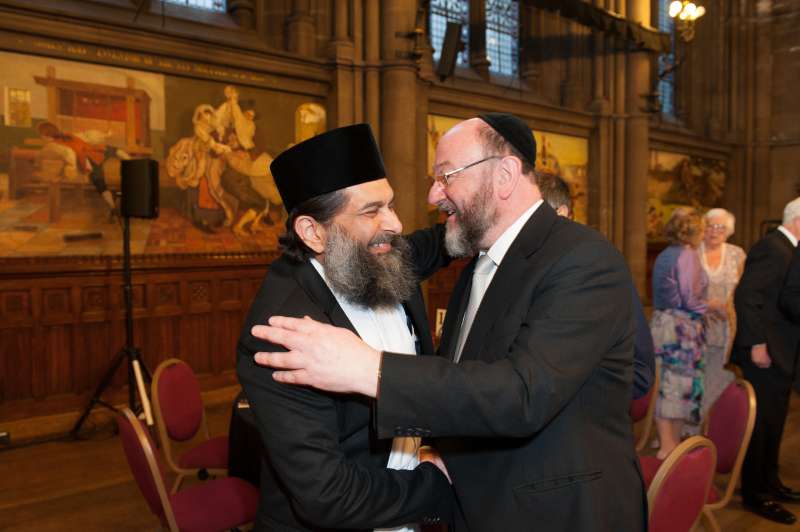 The dinner had two keynote speakers. The Chief Rabbi of the United Hebrew Congregations of the Commonwealth Ephraim Mirvis is the most senior Jewish religious figure in the Commonwealth. Shaykh Ibrahim Mogra has served as an Assistant Secretary General of the Muslim Council of Britain since 2008, appears regularly in the media, and responded for Britain’s Muslim community when Rabbi Mirvis hosted a “get to know you event” for British Muslims prior to taking office as Chief Rabbi.

Mark Guterman and Hayley Guterman, son and granddaughter of Co-Founder of MJF late Henry Guterman MBE were present at the dinner, along with our other Co-Founder Afzal Khan CBE MEP who was Manchester’s first Muslim Lord Mayor.

The Master of Ceremonies officiating at the dinner was Jonny Wineberg, a past Co-Chair of the Forum, while the kosher catering was provided by Michael Issler’s JS Restaurant.

Welcoming the guests, Co-Chair Mohammed Amin said “As the title of the dinner gives away, we really were founded 10 years ago. For me, the quality of the guests we have tonight shows how far we have come in that time.”

Co-Chair Heather Fletcher gave the dinner guests a short history of the Forum’s first 10 years, pointing out “I believe that mixing together and getting to know each other is the best way to achieve community cohesion. It is ignorance and fear which causes suspicion and intolerance but it is understanding and bonding which promotes peace and harmony.”

The Chief Rabbi and Shaykh Ibrahim Mogra each gave very insightful and moving speeches. In particular, the Chief Rabbi reminded us “One cannot have peace without communication.”

Shaykh Ibrahim Mogra said “Before we are Jewish or Muslim, we are all human beings. Before I can be a good Muslim, I first have to be a good human being. We must promote mutual respect and ensure that we do not tarnish entire communities for the actions of a few.”