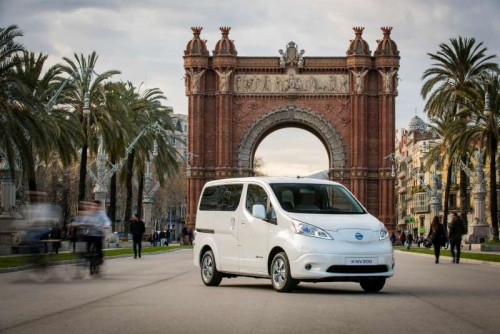 Nissan will broaden the appeal of its award-winning all-electric e-NV200 this summer with the UK launch of a versatile and practical seven seat version.

The new model – the world’s first pure electric seven seater – is being introduced in response to huge interest from fleet operators and larger families keen to capitalise on the market-leading e-NV200’s low running and maintenance costs and zero emissions performance.

Prices start at £19,895 (incorporating the Government Plug-In Car Grant) for those choosing the convenience of the Nissan Flex battery leasing option*, and from £23,400 (inc PiCG) for those purchasing outright.

At the same time, the e-NV200 line-up will be further strengthened with the addition of a new ‘Evalia’ version available in five and seven-seat form – offering a ‘full trim’ option for the ultimate combination of technology, style, sophistication and comfort.

The developments mean the e-NV200 will be available as a panel van, five or seven-seat Combi, or five or seven-seat Evalia – giving customers the freedom to specify a vehicle that best suits their lifestyle or business requirements.

Launched in response to demand

The launch of the seven-seat version fills a gap in the market for an electric vehicle (EV) capable of accommodating larger groups of people. Private hire companies and shuttle services in particular have been keen to see its introduction since the e-NV200 was launched last year.

The reason for this demand is clear. The e-NV200, which is based on the proven technology of the Nissan LEAF – the world’s bestselling electric car – costs from just two pence per mile** to run and costs much less to maintain than a conventional diesel van.

Total cost of ownership is estimated to be £2,500 lower than a conventional diesel over three years***.

Yet, despite the low costs of ownership, the e-NV200 offers outstanding all-round performance. It has a homologated NEDC range of 106 miles on a single charge and can be charged from zero to 80% full in as little as 30 minutes.