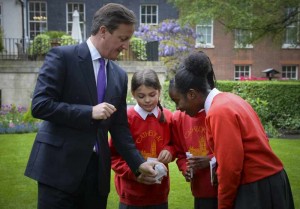 The prime minister “is committed to free school meals in England”, an official spokesman told the BBC.

The coalition government introduced the meals a year ago for all pupils in the first three years of school in England. But there has been speculation the meals are at risk, after Chancellor George Osborne demanded cuts of between 25% and 40% from unprotected budgets, reports BBC news.

The spokesman said the prime minister had made the point that “it was in the manifesto, the manifesto words are very clear – we’re proud of what we’ve done with free school meals”.

The Conservative Manifesto pints out, “We will support families by providing free meals to all infants”.

The chancellor had called for the cuts in July, as part of his Spending Review, due to be published in November.

The free school meals budget has cost about £600m each year, and there has been speculation the meals could be vulnerable as they are not part of the per-pupil schools budget, which is protected.

At the weekend some 40 top health professionals signed a letter to the Sunday Times newspaper, warning scrapping the meals could harm children’s health.

“It would be short-term thinking indeed for the government to cut the funding for universal infant free school meals,” said the letter.