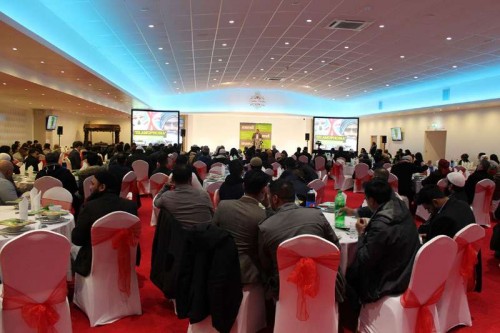 In a groundbreaking event organised by MEND (Muslim Engagement and Development) took place on 13 January at the Eastern Pavilion in Oldham. The event, ‘Challenging Islamophobia – Building Communities’ attracted a capacity crowd of more than 300 people all attending to show their support for community solidarity and local initiatives to tackle Islamophobia.

Kabir Ahmed, presenter on the night, spoke of the desperate need for such events in order to raise awareness of Islamophobia. He iterated the role of irresponsible media outlets in perpetuating anti-Muslim bias in news reporting and its impact on religious hate crime.

Muzemil Kernain, inspector of Greater Manchester Police emphasised the force’s commitment to tackling Islamophobia, with GMP being one of the forces in England and Wales which records Islamophobia under a separate crime flag. Kernain said GMP has “zero tolerance for all types of hate crimes and victims are fully supported not only by the police but also by the council, elected members, housing associations and other organisations.”

Councillor Abdul Jabbar praised the ‘very considerable and high profile’ contributions by Muslim communities in Oldham saying the council was committed to promoting community cohesion. He said there was massive under reporting of Islamophobia and encouraged victims to report hate crime incidents to the police and race equality council.

Councillor Shoaib Akhtar stated that “Islamophobia is on the rise not only in Europe but also in the UK” and focused on how women are more likely to be singled out for abuse and attack because of their religious dress (headscarves).

Dr Shamim Miah, senior lecturer in sociology at the University of Huddersfield, talked about locating Islamophobia in the broader context of social justice as taught by Muslim scholars and embedded in a culture of collective action. Dr Miah said discrimination against Muslims does not mean that other forms of discrimination do not exist; he highlighted the prevalence of homophobia and anti-semitism in society. The crucial distinction was that Islamophobia is regarded as social acceptable.

Father Phil Sumner of Oldham Race Equality Partnership highlighted that a major factor in the rise of Islamophobia was the declaration of the ‘war on terror’ in 2001 and the division of societies and communities into “us” and “them”. It was this “binary way of looking at things” that had led to the rise of Islamophobic attacks across Europe, he added. Father Sumner rejected the “Je suis Charlie” statement saying it overlooked the offensive nature of the Muhammad cartoons and their perpetuation of the “binary world of us and them”.

Closing remarks were delivered by MEND’s Head of Community Development and Engagement, Azad Ali, who drew attention to the organisation’s campaigns on tackling anti-Muslim bias in the media, supporting victims of anti-Muslim hate crime and working with police forces to record Islamophobia. Ali said, “Islamophobia is not an abstract idea, it is not an opinion, Islamophobia is a crime and its victims are the many innocent Muslim men, women and children who have been targeted for no other reason than their religious belief.”

Ali encouraged the audience to get involved with MEND, raise public awareness about Islamophobia and build solid relationships of mutual respect and mutual support in local communities.

The event was organised by Hushiyar Ali, Nanu Miah and Kabir Ahmed, local Oldham residents who felt passionate about this issue and wanted to raise awareness in the community.