When the whole world is moving forward, the students union which produced world leaders like Benazir Bhutto,  Tony Blair and Boris Johnson is embroiled in a racist row. The Oxford Union has apologised for its action but the wounds it created will take time to heal…writes Asian Lite, Best newspaper for British Asians 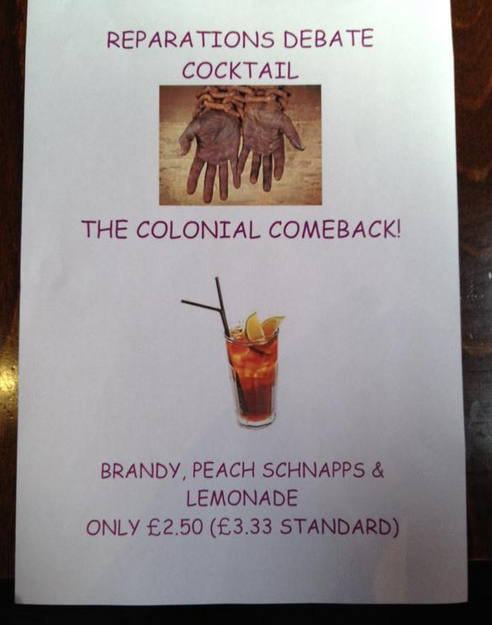 The Oxford Union has passed a motion condemning itself as “institutionally racist” after a flyer was posted advertising a cocktail called the “Colonial Comeback.”

The ‘drink’ to be served at a debate about the British Empire which was attended by Shashi Tharoor, former Indian minister and UN deputy secretary general; Sir Richard Ottaway, a former Conservative MP; and historian John Mackenzie.

The flier was created as part of the promotion of the event entitled “This house believes Britain owes reparations to her former colonies”. The flyer featured an image of a pair of black hands shackled in chains under the heading “Reparations Debate Cocktail”, prompted an outcry from students and sharp condemnation from the university.

A spokesperson for Oxford University said: “There is no place at Oxford for the kind of crass and insensitive attitude that the material produced by the Oxford Union suggests.

The university has no jurisdiction over the Oxford Union,

“While we are confident that it in no way represents the vast majority of Oxford students, racially insensitive comments or behaviour of this or any kind are unacceptable at Oxford and its colleges,” she added.

Students expressed outrage on Twitter and the matter was investigated at a heated meeting of the union standing committee on Monday. The racism motion is reported to have been proposed by the treasurer Zuleyka Shahin.

Esther Odejimi, the union’s black and minority ethnic (BME) officer, told the student paper Cherwell that she intended to resign. “This ridiculously insensitive poster has been pasted up on the union walls. I’m disgusted at the way they have behaved both towards me and the wider black community. I want nothing to do with them at all,” she was quoted as saying.

Founded in 1823, the Oxford Union describes itself as “the last bastion of free speech” and claims to be the most famous debating society in the world. Its long and eclectic list of past guest speakers includes Marine Le Pen, Ronald Reagan and the Baywatch star Pamela Anderson.

The university itself will be embarrassed by the incident at the union, which is legally separate and over which it has no official control.

The uni spokesperson added: “It is a top priority for Oxford to identify and address any ways in which we can better ensure students feel safe and well represented at Oxford, both by institutional policies and the way they are treated by their peers.

“Students have given us a detailed and nuanced account of black and minority ethnic student experiences at Oxford. It showed that while BME students generally thrive and do well at Oxford, there are incidents of insensitivity and some students can feel isolated.

“The university is committed to addressing this, and welcomes the fact that its students can raise these issues in a constructive and co-operative atmosphere.”

Kiran Benipal, co-chair of the Campaign for Racial Awareness at Oxford University, said there was an ‘uncomfortable silence’ before the motion was passed.

She told the Daily Telegraph: ‘We had been discussing whether the cocktail was racist, and whether the way the Oxford Union dealt with it was indicative of further problems.

‘The Treasurer proposed a motion that “The Oxford Union is institutionally racist” and it was discussed for about 15 minutes before being passed.

‘They now have to do some work to deal with the fact that they have recognised that they are an institutionally racist organisation.

‘The cocktail was symptomatic of a wider problem in the Union of racism. There is a culture where someone felt comfortable enough to make a poster like that and felt that it would go unpunished.’

She said that the Union had made contact with her about arranging race training workshops for its officers.

Sizwe Mpofu-Walsh, a spokesman for Rhodes Must Fall, an Oxford University group which campaigns against imperialism, said: ‘Officers realised that [the cocktail] was reflective of an institutionally racist culture that marginalises black and minority voices.

‘This motion sends a very clear message that the Union and its leadership acknowledge the scale of the problem and that there is a systemic problem in the Oxford Union that silences certain voices.’