Meanwhile,  BJP activists in Bengaluru heckled a young Australian man for sporting a tattoo of a Hindu goddess on his leg. Although no complaint was filed, police vowed to take up the incident “seriously”.

In a repetition of what the Shiv Sena did to noted journalist Sudheendra Kulkarni in Mumbai, members of the little known Hindu Sena smeared ink on independent Kashmir legislator Engineer Rashid’s face here.

Police detained two suspects after the attack outside the Press Club shortly after he had spoken about a fire bomb attack in Udhampur that left a truck cleaner from the Kashmir Valley dead.

Rashid’s face was smeared with ink, and the black liquid spilled on to his clothes. An associate of Rashid was also targeted with ink.

Rashid was earlier this month thrashed by BJP legislators in the Jammu and Kashmir assembly for hosting a beef party. The state’s BJP Deputy Chief Minister Nirmal Singh later apologized on behalf of his party.

The Hindu Sena claimed responsibility for the ink attack.

The Shiv Sena showed aggression again in Mumbai as some 70 activists barged into the office of BCCI president Shashank Manohar against his move to hold talks with his Pakistani counterpart Shahryar Khan.

There was speculation that the talks between the Board of Control for Cricket in India and the Pakistan Control Board might be shifted to New Delhi. 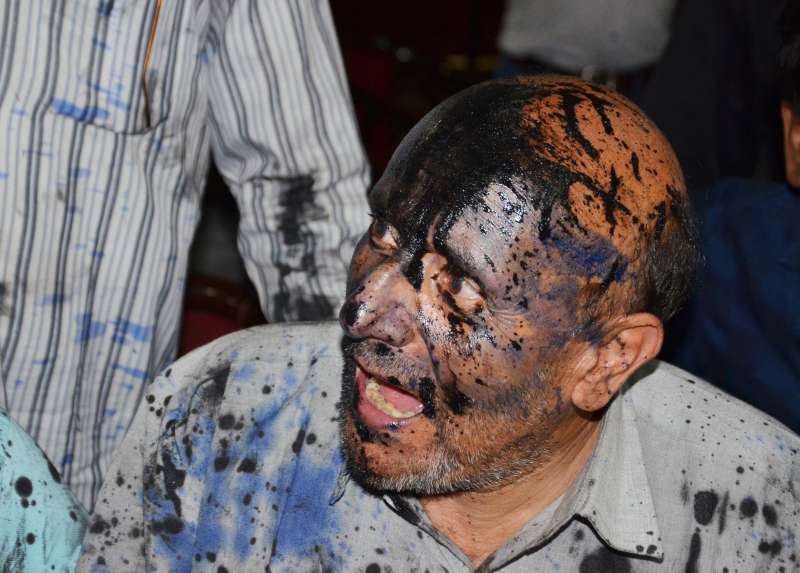 That didn’t happen. Instead, BCCI Secretary Anurag Thakur, a BJP member of the Lok Sabha, announced that the Test series between India and Pakistan would not take place in December. But Thakur denounced the Sena.

“I condemn this attack because you cannot barge into the BCCI office and force cancellation of the talks. In a democracy, you can protest but you can do it on the streets but you can’t barge into anyone’s office, home or headquarters,” he said.

Monday’s was the second major protest in a fortnight by the Shiv Sena against Pakistan.

The Sena first forced the cancellation of Pakistani ghazal maestro Ghulam Ali’s concerts in Mumbai and Pune, and then attacked journalist Sudheendra Kulkarni before he hosted the launch of a book by former Pakistani foreign minister Khurshid Mahmud Kasuri.

In Lahore, Pakistan’s Punjab assembly urged the government to approach the UN to get the Shiv Sena declared a terrorist outfit.

In Bengaluru, Deputy Commisioner of Police Sandeep Patil said action would be taken against those who heckled the Australian, Matthew Gordon, 21. He had a tattoo on his left leg of Hindu goddess Yellamma.

The heckling occurred at Konark restaurant in downtown when Gordon was seated with his girl friend Emily Kassianou, 20.

“A dozen people walked up to me and threatened to skin my leg if I did not remove the tattoo and apologise to them,” Gordon told police.

In faraway Birbhum district in West Bengal, President Mukherjee made a passionate plea for tolerance.

“We celebrate diversity, we promote tolerance, we accept dissent. If it wasn’t there, India’s cilization couldn’t have survived for 5,000 years,” he said.