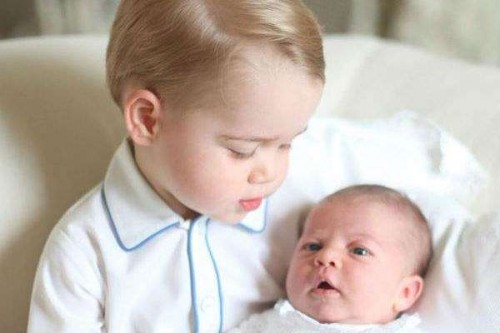 A series of photos of Britain Prince George and his sister Princess Charlotte have been released by Kensington Palace.

The four pictures show the princess being cradled by her elder sibling as they sit on a cream couch at Anmer Hall in Norfolk, their family home with the Duke and Duchess of Cambridge, BBC reported.

The pictures were taken by Duchess Catherine just weeks after Princess Charlotte was born on May 2.

In an earlier tweet, Kensington Palace said the images were “very special”.

In each of the pictures, Charlotte is lying on her brother’s lap, wearing white. The prince is wearing a white shirt, blue shorts and blue socks.

In one, he appears to be kissing his sister on the forehead.

The Duke and Duchess of Cambridge and their children have been at Anmer Hall since leaving London shortly after the birth of the princess.

Prince William and Catherine are expected to be based there for the next few years as they raise Princess Charlotte and Prince George, who is almost two, with the help of a full-time nanny.

The first official images of Prince George, released in 2013, were taken by the duchess’s father, Michael Middleton, in the garden of their home in Bucklebury, Berkshire.

On Friday, it was announced Princess Charlotte will be christened on July 5.

The fourth in line to the throne, her full name has been registered as Her Royal Highness Princess Charlotte Elizabeth Diana of Cambridge.