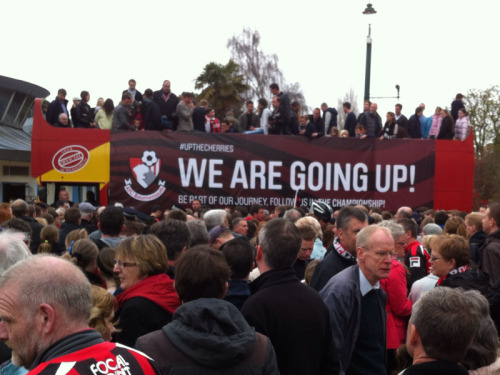 The agony and the ecstasy of English football continued to be played in the coastal town of Bournemouth.

For the first time in its history, AFC Bournemouth, founded in 1899, has been guaranteed promotion to English football’s top-flight Premier League, sparking jubilant celebrations across the town, reports Xinhua.

The promotion was assured  with a 3-0 win against Bolton in the second-flight Championship League.

As the 2014-15 season draws to a close, Bournemouth’s drama was played out before a capacity 11,700 crowd at its Goldsands Stadium.

As Bournemouth celebrates its victory teams propping up the lucrative Premiership are fighting for survival, with three doomed to demotion to the Championship.

For Bournemouth though, the rags to riches story starts today. Just a few years ago the club was broke and was on the verge of extinction.

Club chairman Jeff Mostyn became the club’s saviour in 2008 when he wrote a cheque for $150,000 to rescue AFC Bournemouth.

He told a local radio station on Tuesday in the south-coast town how when he arrived, the club was so poor it couldn’t even afford to buy a single postage stamp.

Now promotion guarantees a bounty of over $150 million, and the prospect to play at the same level of the some of the world’s greatest teams, like Manchester United, Chelsea, Arsenal, Liverpool and others, heading to stadiums with up to five times the crowd capacity as its own ground.

Bournemouth’s stadium will be the smallest in the Premiership.

“Bournemouth have “achieved the impossible,” commented Mostyn in his radio interview, adding: “six years ago we were on the edge of abyss.”

Technically confirmation will only come at the weekend as Bournemouth have a final match to play, but would have to lose by an unheard of margin of 20 goals.

The win over Bolton though was enough to kick-start the celebrations by fans of the club, known affectionately as the Cherries.

Mostyn said the achievement was a moment for everyone at the club to savour.

“We’ve climbed right through the leagues and into the Premier League. It’s just incredible. I don’t think anybody, not even the craziest optimist, would ever have thought this was possible,” he said.

“The reality is we are going to be rubbing shoulders with football’s glitterati next season and we’ll do ourselves proud. For me this is achieving the impossible. For all football fans, this is the perfect story and hopefully it gives hope for every club that you can come back from oblivion and get to the Premier League.

“I am so proud of everybody and my total respect to the owner, the chief executive and all the staff. When I first arrived, we could not afford a first-class stamp.”

Fans, desperate to see their beloved club survive, held bucket collections to raise cash as they played their part in the rescue mission.

Meanwhile, a dog-fight will continue over the next few weeks in the Premiership with the three bottom teams exiting to the lower Championship.

Gambling companies have already given clubs like QPR and Burnley FC low odds at survival in the top flight.

It proves, as it does every year, that football is a game of smiles and tears.