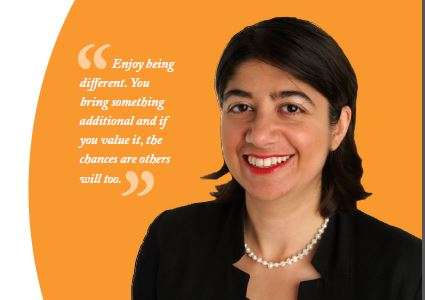 Seema Malhotra MP was featured in the latest Parliamentary Role Models Campaign.  The campaign recognises the importance of a working environment where people are valued for who they are and how they contribute to making Parliament a positive, inclusive workplace environment and institution.

“Enjoy being different,” Seema said in the campaign. “You bring something additional and if you value it, the

chances are others will too.”

The campaign highlight that anyone at any level can be a role model. It championing the importance of having visible, diverse role models at all levels of the organisation who people can be inspired by. It is also important for the campaigners to celebrate those who go out of their way to act as role models and to recognise the positive impact that they have made on individuals, the wider organisation, and beyond in encouraging people to engage with Parliament.

“I believe very much in the need for diverse teams – for example, in terms of age, gender, ethnicity, background – so that we see a greater range of people developing experience and an understanding of Parliament and connecting with politics today,” Seema, the Labour’s Shadow Chief Secretary to the Treasury, said. “. I also try to create opportunities for work experience for local young people – climbing any ladder starts with the smallest first step and the knowledge that someone believes in you.

“It means a lot to be told that you are seen as a role model and quite humbling also as you don’t tend to see yourself in those terms. I remember moments on my personal journey when someone helped me move forward at a difficult crossroad, or helped me identify a path I could travel to reach my goal. Role models are important as symbols about where you are going and helping you map your own journey there. Being a role model and mentoring gives you a chance to share lessons from your life as well as remembering what others have done for you and paying it forward.

“When you walk into a room full of men and suddenly feel conscious of being female and Asian, it makes you focus on what makes you different. For a moment it knocks your confidence. But it’s important to remember you aren’t there by accident. You have an equal place at the table and you should focus on the job you have to do. At those moments enjoy being different. You bring something additional and if you value it, the chances are others will too.

“I hope people will see someone like them achieving a goal they didn’t think was possible and encouraging them to take bigger and bolder steps. My parents have always been role models for me for the way they lived life and their values. In terms of politics, senior politicians (men and women) have been enormous inspirations to me and in fact continue to be so.

“As a role model, I commit to mentoring, speaking at events in Parliament and drawing on my networks to support others coming forward.

Seema was appointed the Shadow Chief Secretary to the Treasury in September 2015. Previously she was the Shadow Minister for Preventing Violence against Women and Girls and a member of the Justice Select Committee. She was elected from  Feltham and Heston in 2011. She retained her seat in the 2015 general election.

Before an MP, Seema  worked as a management consultant and in IT systems development. She is also the Founder and President of the Fabian Women’s Network.